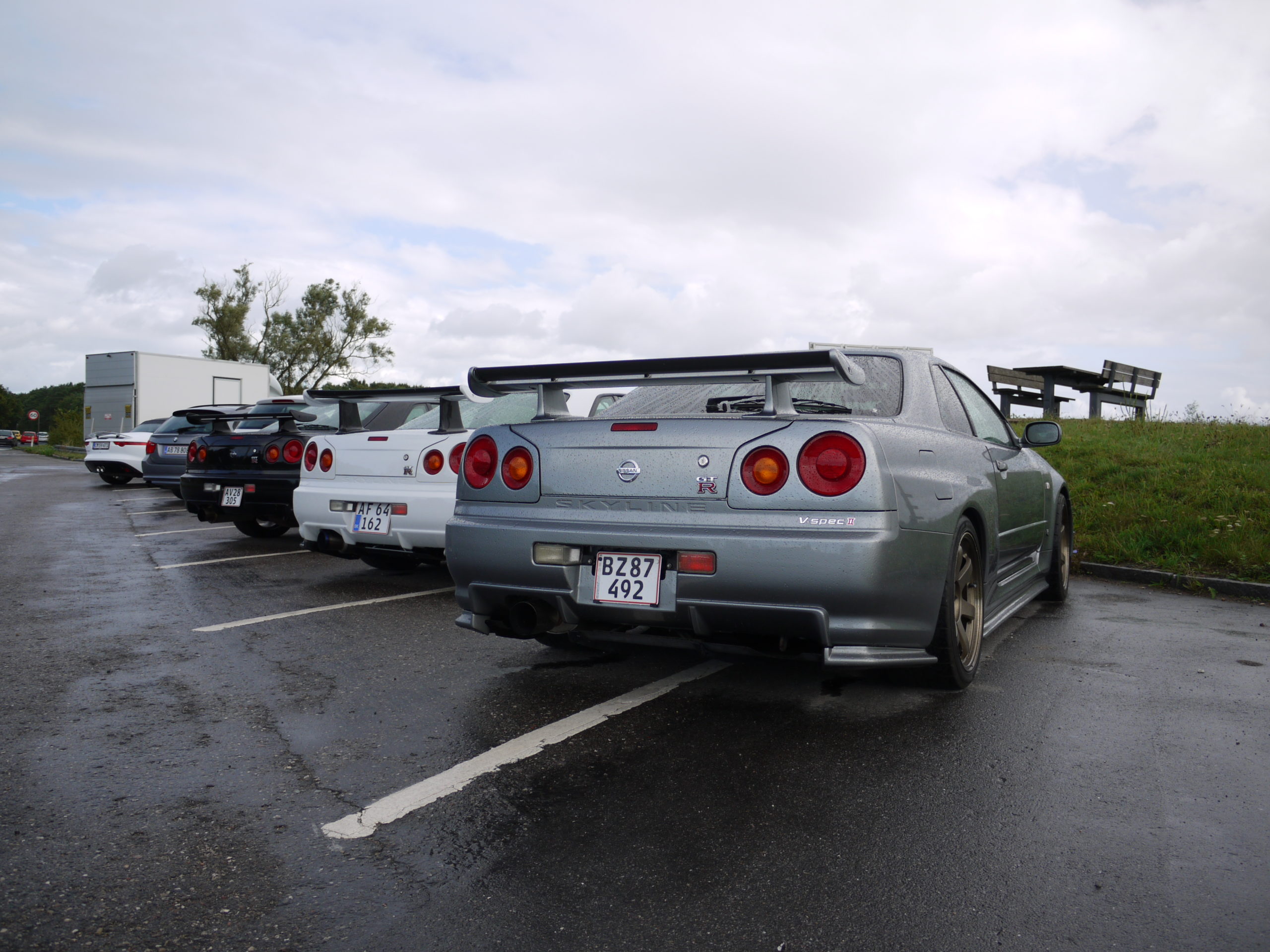 Nissan Skyline. Undeniably words that most of you have stumbled upon, at least one time in your life. Whether you’ve seen the fast and the furious movies or seen it in real life or overheard a friend talking about it. If you don’t, then it’s time for you to learn and if you already know, it’s time to learn even more! This car is one of the biggest, if not the biggest involvement in shaping the modern sports car culture and the way we think of it. 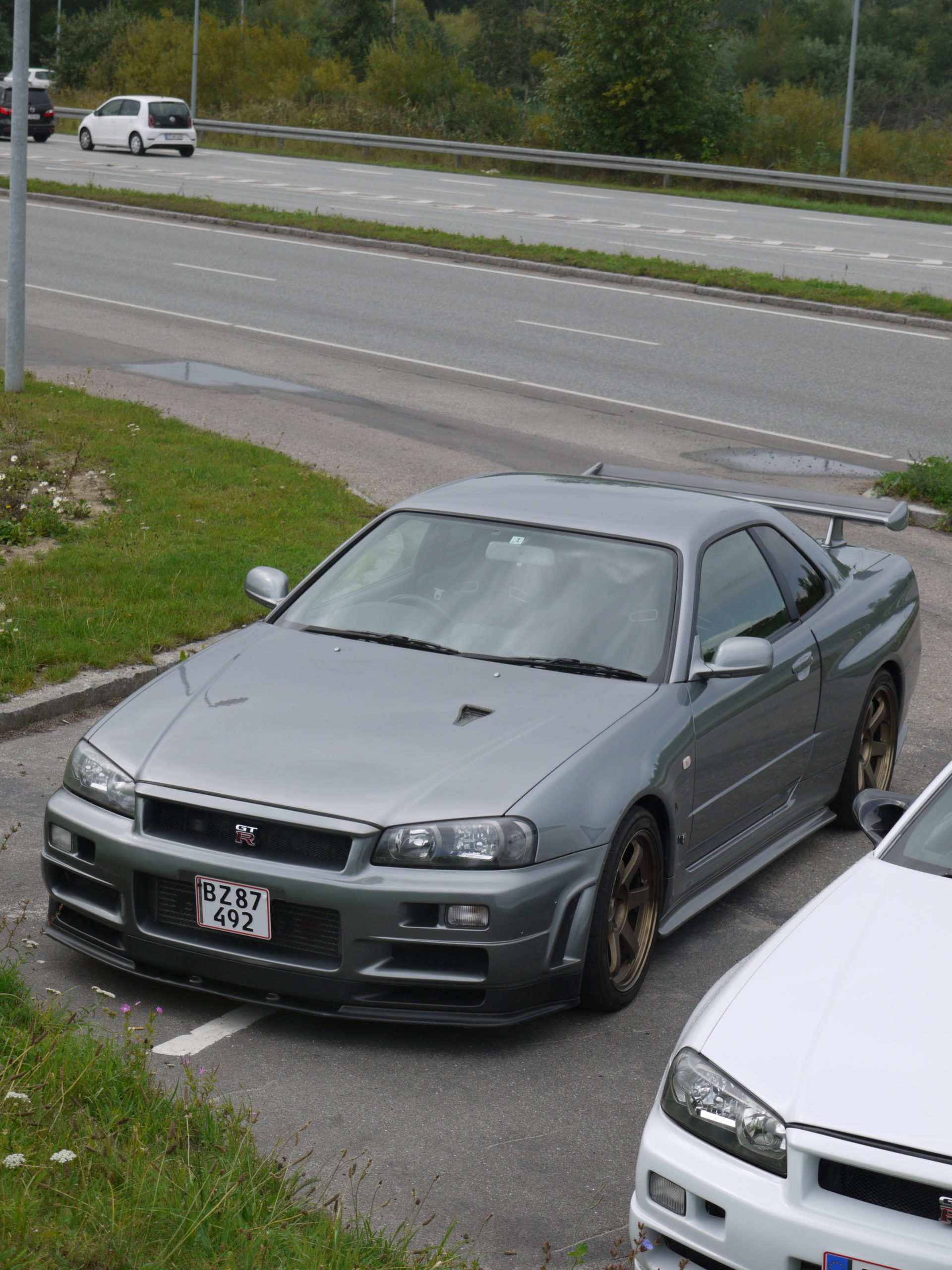 The history of the Skyline.

Nissan Skyline brought a fresh wind from the far east in japan where it was originally launched back in January 1999. It was under the name Nissan Skyline GTR R34. But It all started way earlier than that. We have to go all the way back to 1969. Or should I say the golden times? Nevertheless… remember we are talking about the 4th generation of the car here. The other models that comes between the first and the fourth generation are also very interesting, but this article would end up turning into a feverish novel, if all these cars have to be included in the article. So we’ll leave them for another article.

The Nissan Skyline GTR R34 comes in many variations and specifications. In this article we are going into detail with what I believe is a both great car, but also a very great and especially interesting investment. You guessed It, I know… The heading might have spoiled just a tiny bit? It is the Nissan Skyline GTR R34 V-spec II. What does the V-spec II means? V-spec stands for Victory-specification. That means you’ve automatically won when you drive one. There is no reason for racing anymore. Wait?… There is always room for racing, and especially in this fantastic car. 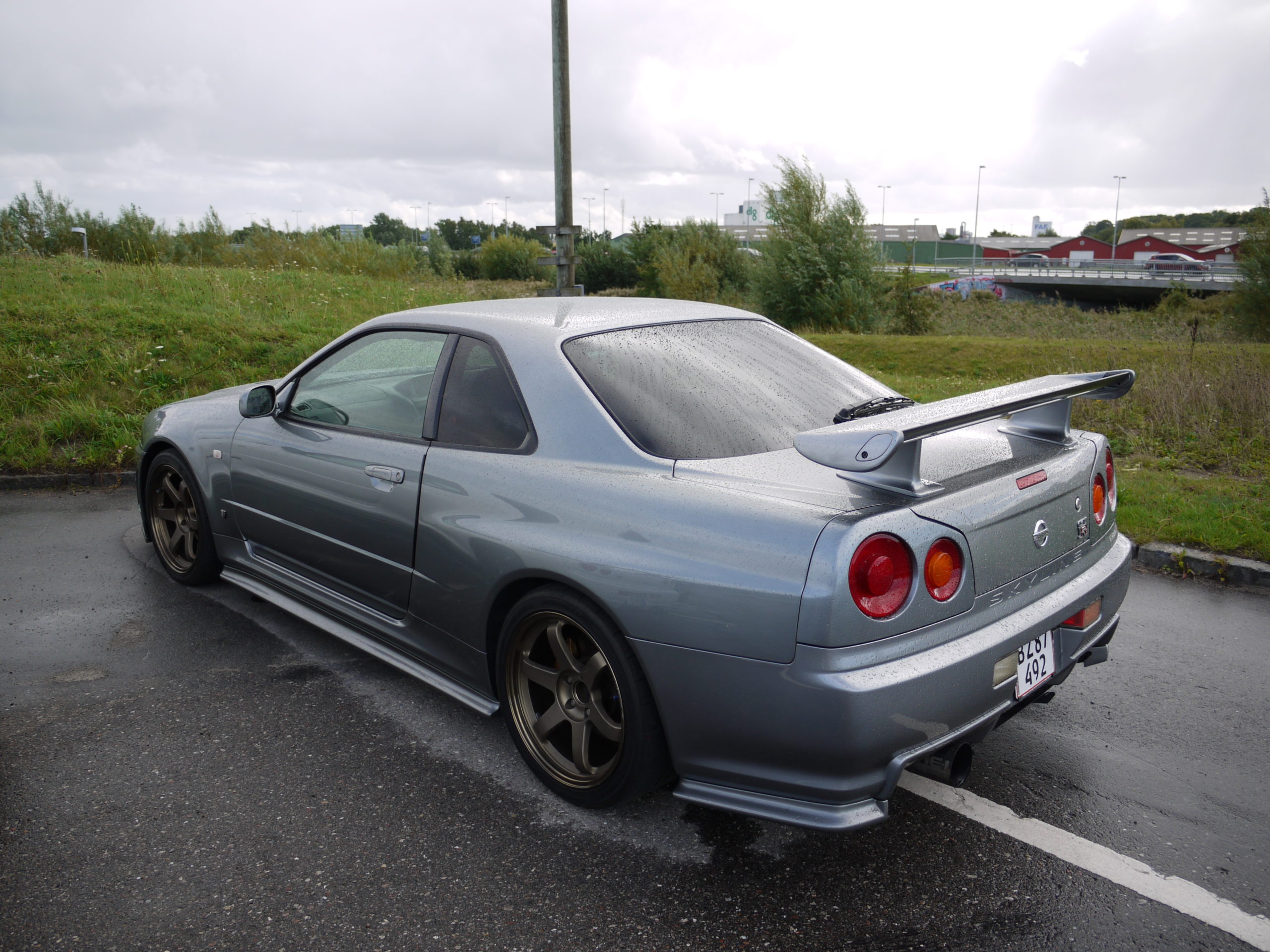 (Drying up from a bit of rain).

Nissan really nailed it with this car even though they were in deep financial trouble at that time. Nissan ended up building only 11.578 models over a period from January 1999 to August 2002. A staggering 14 separate versions of the this exact car was build, but eventually broke down into a series 1, funny enough called V-spec I that ran from the early 1999 trough until mid 2000. Producing 7066 cars, which is more than half of the total production. Series 2 was funny enough also called V-spec II and replaced the Series 1 in August 2000. V-spec II, ran until end of the production in 2002 with a much fewer cars produced. Only 4512 cars were produced, making the V-spec II much more rare.

If you’ve seen Fast and the Furious 2, or played the Gran Turismo games you know just how good it is when it comes to Its driving abilities. The movies nor games doesn’t make it stand out more than it’s really capable of. That tells a lot. Oh wait… Except for the long jump over the bridge in Fast and the Furious 2, that is maybe a bit over exaggerated.

How is it to drive?

It really is a great car to drive both cruising and on the very limit. With all the electronic programs and active 4-wheel drive that is truly magnificent and ahead of its time it. Have I tried it? Only in the passenger seat. But what a car! I tell you, It takes corners like no other car that is more than 20 years old. The traction it has is spectacular and there is grip even at the very edge of both the driver and the cars abilities. 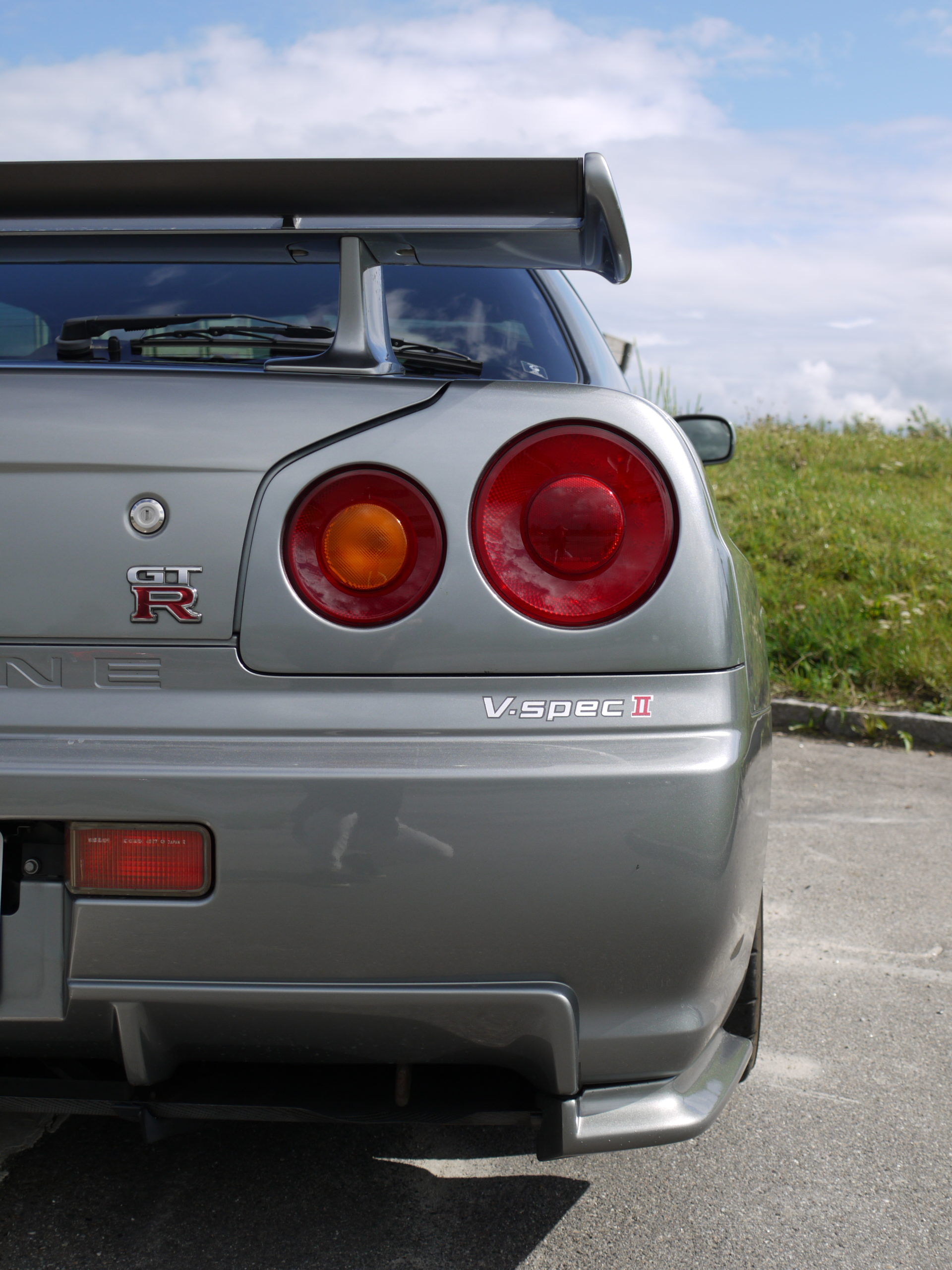 (GTR and V-spec II logo really adds something to the car).

Is it a good Investment?

What are we looking at in terms of Investment? Well… You’re looking at one of the prime Japanese Investment cars, I would say. This car along with the Toyota Mark IV Supra and Mazda RX7. This exact model covered in this article is even more interesting, because it is a V-spec II. That makes it more interesting for collectors due to the exclusivity and the fact that the one documented in this specific writing is pure stock with original engine, interior and color etc. It even has the super rare Carbon hood that reduces weight and gives it a very cool look when the hood is open.

So how much could you expect to make on a fine model like this one if you purchased it back from new and drove around 50.000km since new? It’s hard to tell exactly. But I’ve tried to give an example on it here with almost the identical spec to the one featured in this article. I’ve found one on this site, that looks very promising and costs $112,000. It’s from 2001 and has almost the same additional equipment except for the color.

In 1999 prices for the Nissan GT-R R34 in Japan started at 4,998,000 Yen (US $45,606). How much is that today then? In today’s money with inflation included, that is around $70,185. With the price around $110,000. for a good model today, It’s clearly that there has been an increase in price over all these years. You would have earned your money back even though you drove it, had fun with that and a history to tell your kids or friends. 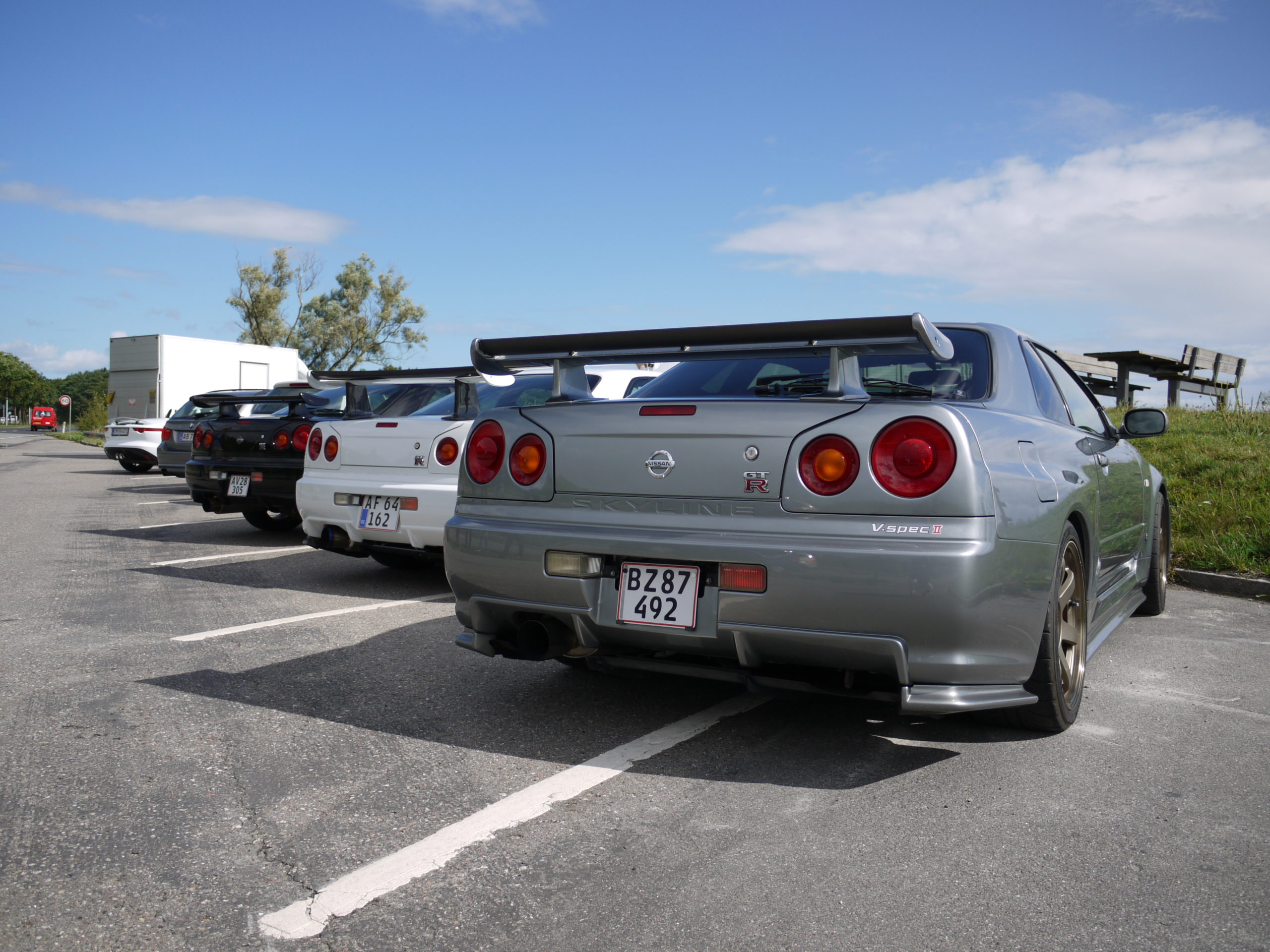 (Three skylines in line. Actually 50% of all the Danish GTR R34 represented here).

You would not only earn your money back on this specific example here. You would actually make 62% return on investment over a 19 year period. That seems quite interesting in my ears. Then imagine having one with all additional equipment and in a rare color, that have driven less than 10.000km. Then you could look at more than 100% in return on your Investment I believe. That goes for most special cars in this category. So to answer the question. Is it a good Investment. The short answer is yes.

What about the future then? It will only increase even more. Mostly because the rarity will only increase. Some of the models will disappear, crash or either degrade of use. If you’re in doubt about selling your model now and are comfortable. Keep it! It’s a gem from the far east everybody sooner or later wants in their own personal collection. Then your car becomes very sought after.