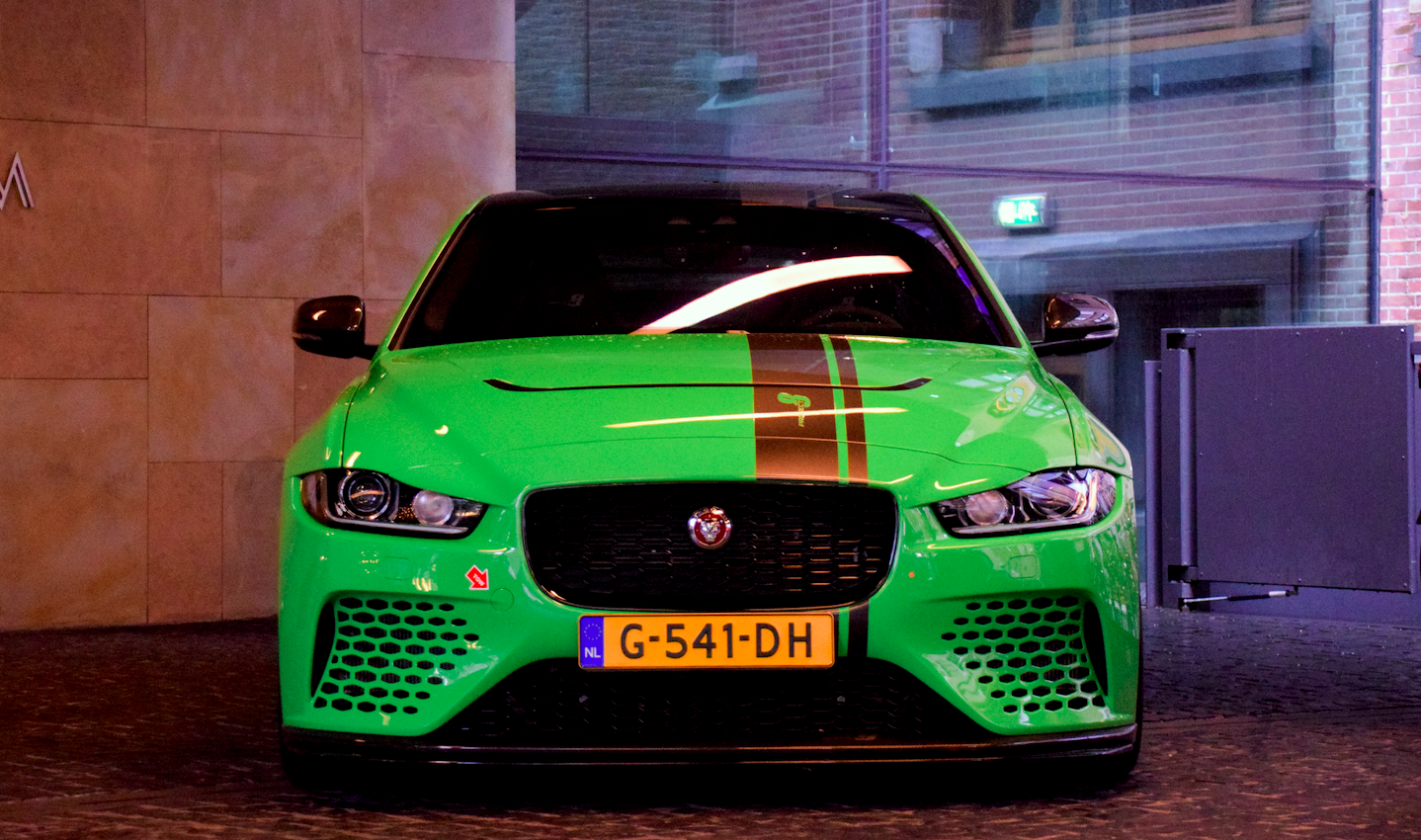 What car is this!? You might have never heard of it, which could potentially explain why it’s so unique. Or maybe it’s just because It Is a very crazy car. Today we are going to talk about the mighty and very extraordinary Jaguar XE Project 8. A spectacular project from a very renowned car manufacturer, making arguably world’s best grand touring cars. 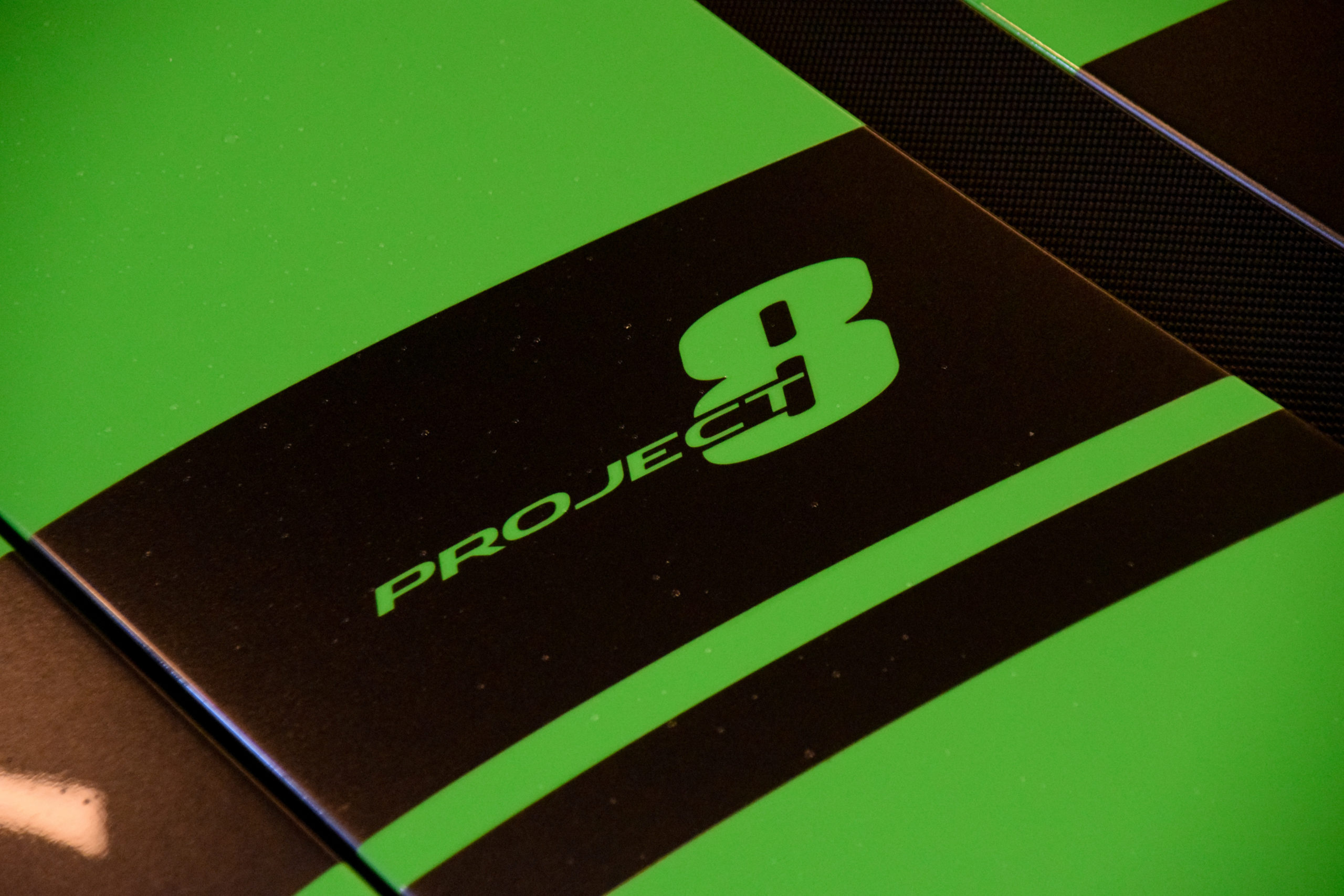 (The Jaguar project 8, clearly displayed on the hood).

Suffering in the 80’s

But as time has moved on, things have changed. Dramatically indeed. Like many other English car brands, Jaguar suffered a lot in the 80’s but came back in the late 90’s and 00’s. The build quality plummeted completely in the 80’s and it’s very easy to spot. Just look at the Jaguar XJS. Especially the one with the V12. It broke down all the time, was insanely slow and weighed more than a school bus. Luckily Jaguars cars turned to the better in the 90’s and 00’s but still lacked the last finishing touch to become just as great as they were in the 60’s.

Jaguar launched their possibly most exciting car ever, the Jaguar XJ220 and later on a more refined version of the XK, as the perfect grand touring car. All this was produced in the period from 1990 to 2000. But radical methods was needed to bring Jaguar back to Its prime of being the best car manufacturer in the industry of making cars.

This is where TATA group saw their opportunity to play a part in that game. TATA group is a multi-corporation of many different businesses that also focuses on cars. They bought Jaguar in 2008 to fulfil the wish of becoming the greatest car manufacturer again. Wait… are you thinking the same as me? Did Donald trump really get his elective idea of becoming president of the united states of America, from TATA Groups purchase of Jaguar? It’s hard to say but it could definitely point in that direction. But We will leave that question for another time.

Back to “The golden days”

With new owner from India (TATA industries) It really brought Jaguar back to the golden days. With an important economical injection things quickly got exciting again. A whole new program of cars! One of the major launches was the F-type in 2013, a tribute to the great Jaguar E-type from the 60’s. Another one of the great cars they bought back was the Jaguar XF (250). It should be a replacement for the old classic Jaguar S-type. A four door rear wheel driven executive car. Later on Jaguar saw the opportunity to release a smaller more compact version of the XF. An Jaguar XE. It was launched in 2014. This is where The Jaguar Project 8 comes into the picture. 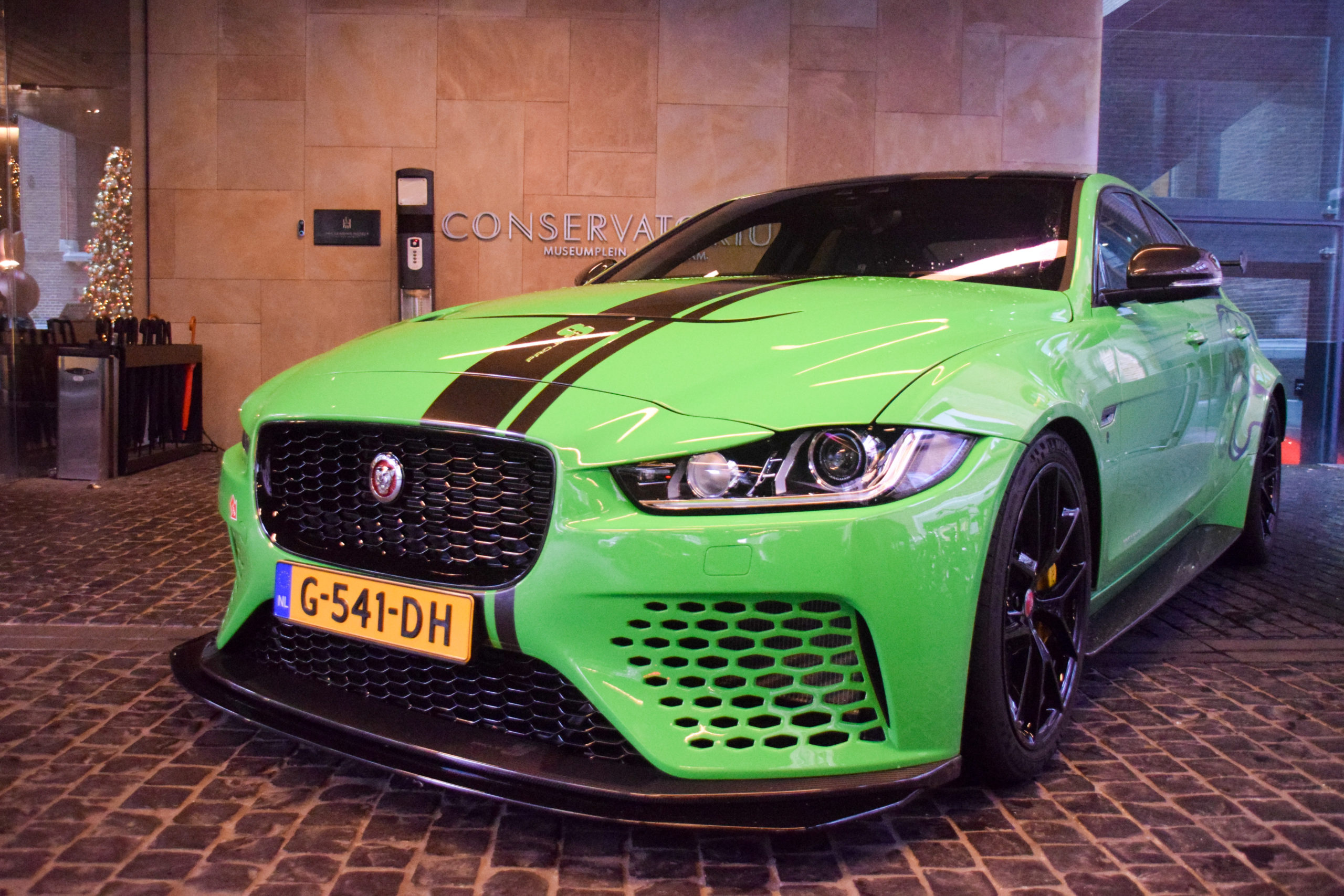 (The Jaguar Project 8, with Its aggressive racing look).

Together with Special Vehicle Operations, Jaguar managed to create a very special car. A true project of art. The Jaguar Project 8. The car is powered by 5.0 Liters Supercharged V8 engine with 600 brake horsepower. almost 3 times as much power as the entry level version of the Jaguar XE with just 240 brake horsepower. It does 0-100 km/h (0-60mph) in just 3.3 seconds. Pure supercar numbers. Let that sink in for a minute… Jaguar claims it is their most powerful road going car ever produced back in 2014. That Is partly true if you look away from the fact they build 6 road going models together with TWR (Tom Walkinshaw Racing) of their Jaguar XJ220, called the XJ 220 S. It produces a staggering 680 brake horsepower.

The Jaguar Project 8 is truly a road car build for the track. With only 300 pieces ever made it is not a surprise that it belongs to Jaguars Collector’s Edition” program. So be extra careful around the Nürburgring, when going there. But what is it like taking for a Sunday cruise on the countryside? With today’s technological wonders it is surprisingly good. Topgear have also given their review, and totally agree on my verdict. Or maybe it’s the other way around? They say the following: “it’s perfectly civilised on the road, too.”  You can read the whole review here.

So what is it like to drive and what rating would I give it? Unfortunately I haven’t driven it myself but from what I’ve heard it sounds like quiet a beast on the track and also useable for the public road. But it belongs on a track and it has always been the keen focus of the project. SVO claims there has been added 122kg of extra downforce when going 300 km/t or (186 mph). That is a lot for a car like this. Along with the massive rear wing these numbers talk for the purpose of racing. 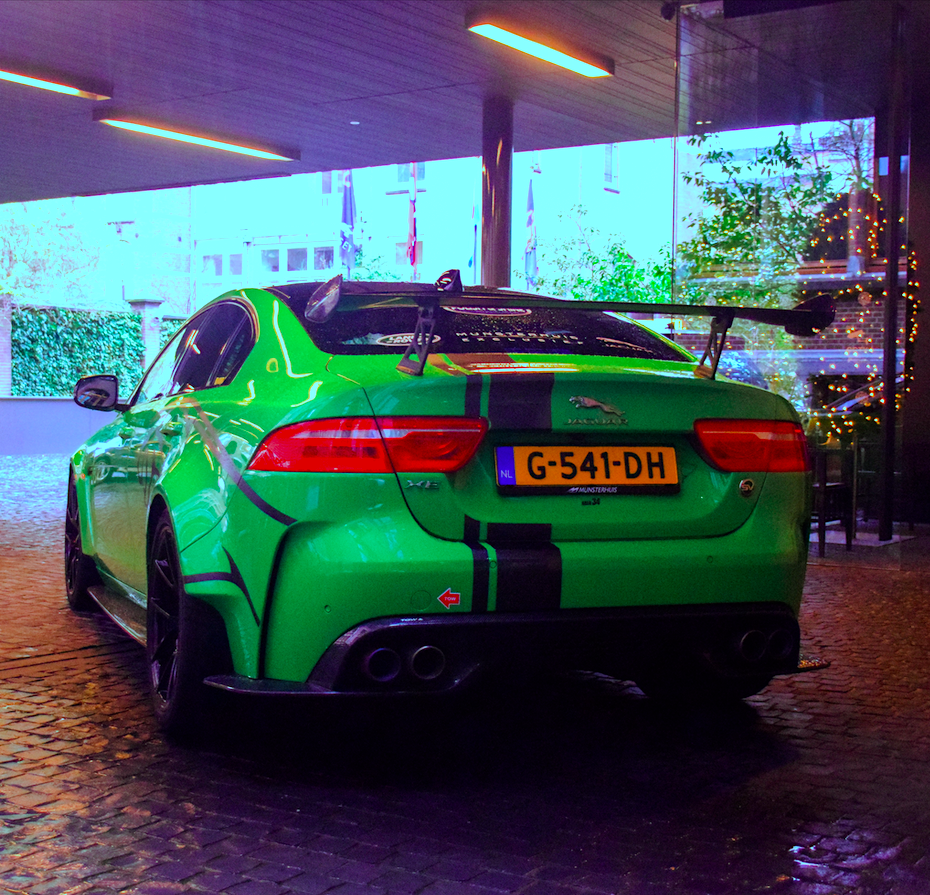 Jaguar have a long history of racing and It seems to live on when they deliver a car like this, made for the track and a true joy to drive. With a critical perspective taken into concern, It Is actually a road going car that can do good but not very great on a track. You have to wake up early if you want to beat a Porsche 911 GT3’s or Mercedes AMG GTS, despite the high price tag. This forces me to give it only 3 out of 5 stars. It needs something extra to get 4 or even 5 stars. Overall a great car with possibly the best sound note on the entire market right now. A thunderstorm in pops and bangs when you ease of the throttle in 2nd or 3rd gear.

What are we looking at in terms of investment potential? As mentioned before this car Is produced with the purpose of racing and as a part of the “Collector’s edition” program. This Is of course an important aspect. With only 300 units ever produced It makes very unique already. Then If you put on the investment glasses and look 10 to 20 years ahead In time there might be even less cars available. Some might have crashed, others forgotten about In a barn or maybe they have driven a lot of kilometres “on a racetrack”.

Look for a model with the right equipment, In mint condition and low mileage. This Is a good foundation for a potentially higher increasing value.  Also with the tendency that Is In the market right now, that everything should be electric, then imagine showing up in this noisy beast and draw all the attention. I bet it would be a stand out on its own. 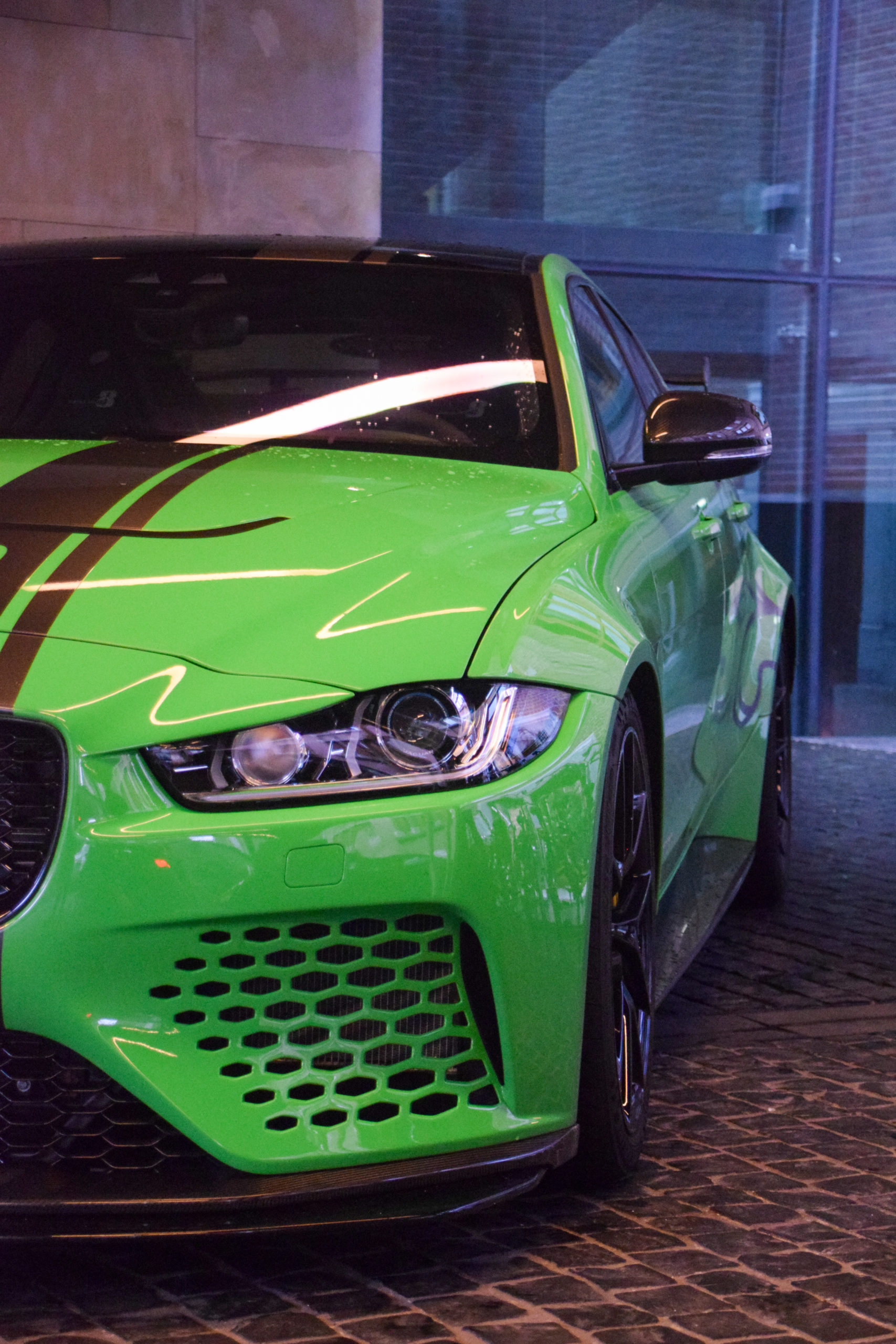 (Attention to detail is what describes this car).

So what would I rate In terms of investment? Based on the market knowledge and the fact there is so few produced overall makes it very interesting. The high price of 160.000 € or 187.500 $ tag should not be a concern since it will only make it even more attractive for the right clientele. The fact it only comes in left hand drive might harm the home market of Great Britain since they have right hand drive. But that is just a minor thing talking it down. This is why I give it 4 out of 5 stars. Overall a strong investment object with high possibility to have a positive return. Right now the market have dipped a little but I’m sure we will see a strong return in price.

Jaguar and their team from Special Vehicles Operations really brought them back to winning ways and have done this ever since 2008. Jaguar is a brand to look out for in the next couple of years with a strong and growing program of interesting cars and models on both the petrol and electric scene. I have an exciting story from my own life including the best car from jaguars new program so far. Jaguar F-type! So get ready for a story of a lifetime and a treat for your ears.