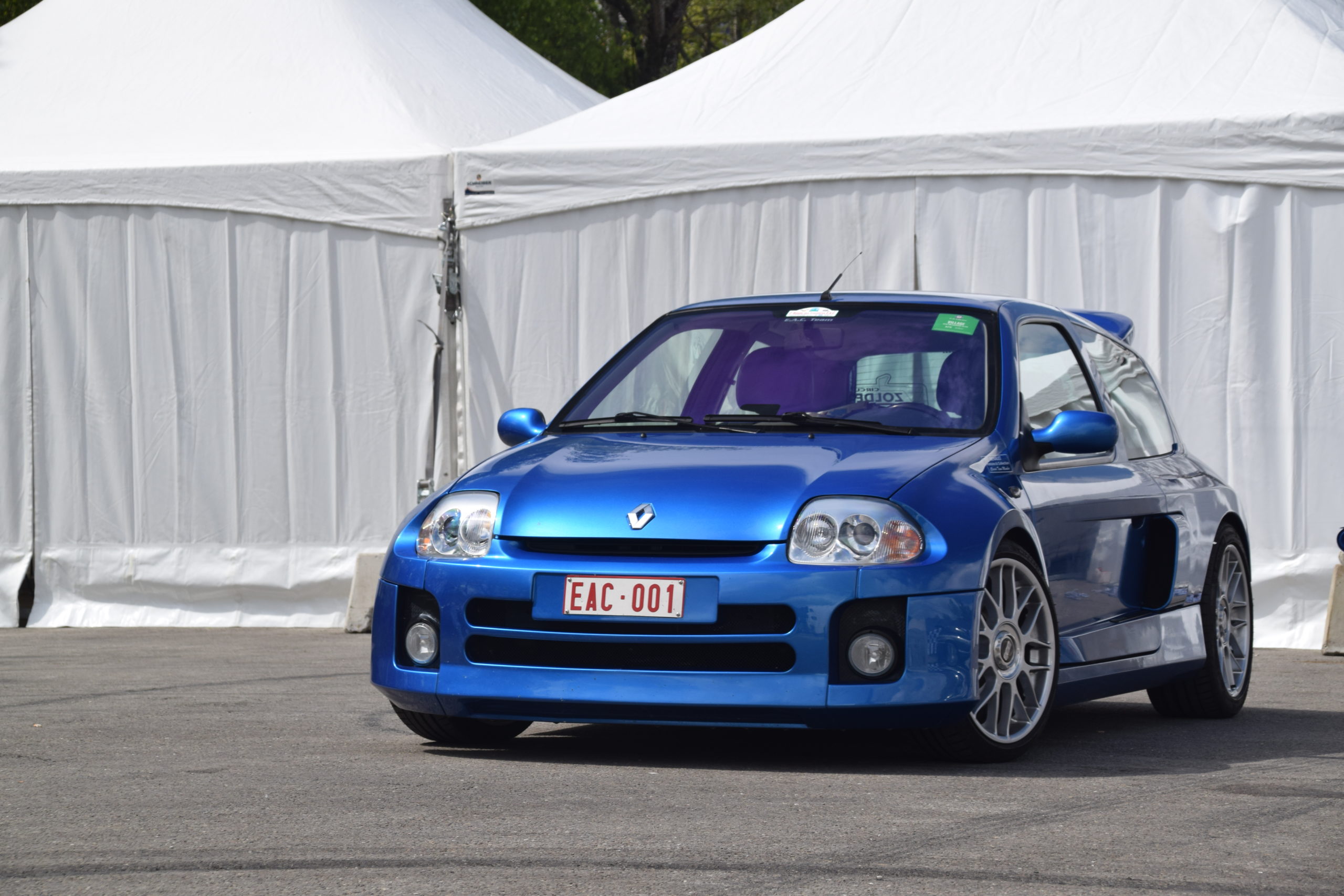 This time we are moving back to the conventional articles about more special cars. Now invading France and dive in to their wonderful car culture. Not invading it literally though. Who could think of that anyway? No! Today we are only going to talk about this little, yet fantastic Renault Clio V6 Sport. We are going to look at why this exact car, have become such a hot topic for Renault fans and general car guys all over the world. We are also going to look at why it might be a good investment in the future, as well as how it is to drive!

The history behind it

So! The history behind this car is just as unique as the car itself. It was a project made to celebrate a century of success for Renault in both motorsport, as well as a car manufacturer. The result of this became one of the coolest pocket rockets to ever leave the Renault factory. It Is the Renault Clio V6 Sport. It was first launched as a project called “Phase 1” from TWR (a tuning company) in 2001 based on the prototype shown from Renault In 1998.

This version from TWR offered pretty immense numbers back then. Featuring a V6 engine with 230 break horsepower and a tight 6 speed manual gearbox. Sending it from 0-100 km/h (0-60mph) in just 6,4 seconds! With a top speed of 235 km/h (145 mph). These things combined with a total weight of just 1335kg, made it very frantic to drive. Some even say it was too crazy for normal people to drive. But that is another story, we are not going into further details with. 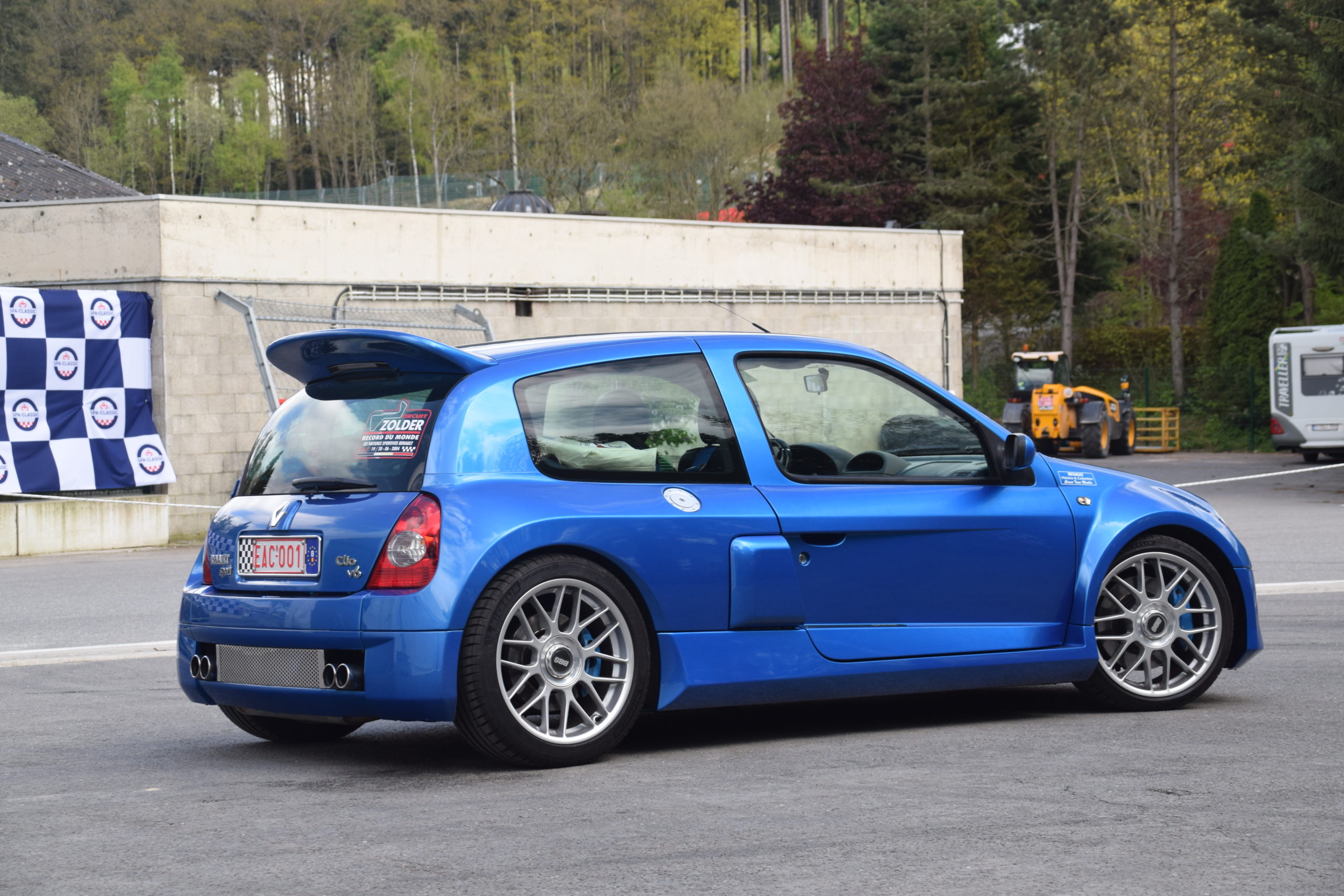 You might think It looks just like a regular Renault Clio from 2001. A Clio that has eaten all the cakes on the table and then become slightly fatter than Its brothers and sisters. Or maybe the designers have eaten all the cake at the office and made the design after that. It’s hard to tell what really happened. No matter what happened back then it was done, with only one purpose in mind. Traction! More Traction! That was not the designers only idea. After eating all that cake, Its belly turned upside down.

You guessed it! It got Its engine placed just behind the front seats. But how are you going to bring passengers then? You simply can’t but you can still try. This was to cope with the idea of making the car rear wheel drive and yet again looking for more traction! The key word under the design of this little beast is pretty clear afterwards: “No traction”. Wait… “More traction” of course.

With the more crazy looks and the even crazier modifications done to it, this is really what gives it the charm and character for it go down in history. Undoubtedly becoming a true little legend, just as fast as the devil. 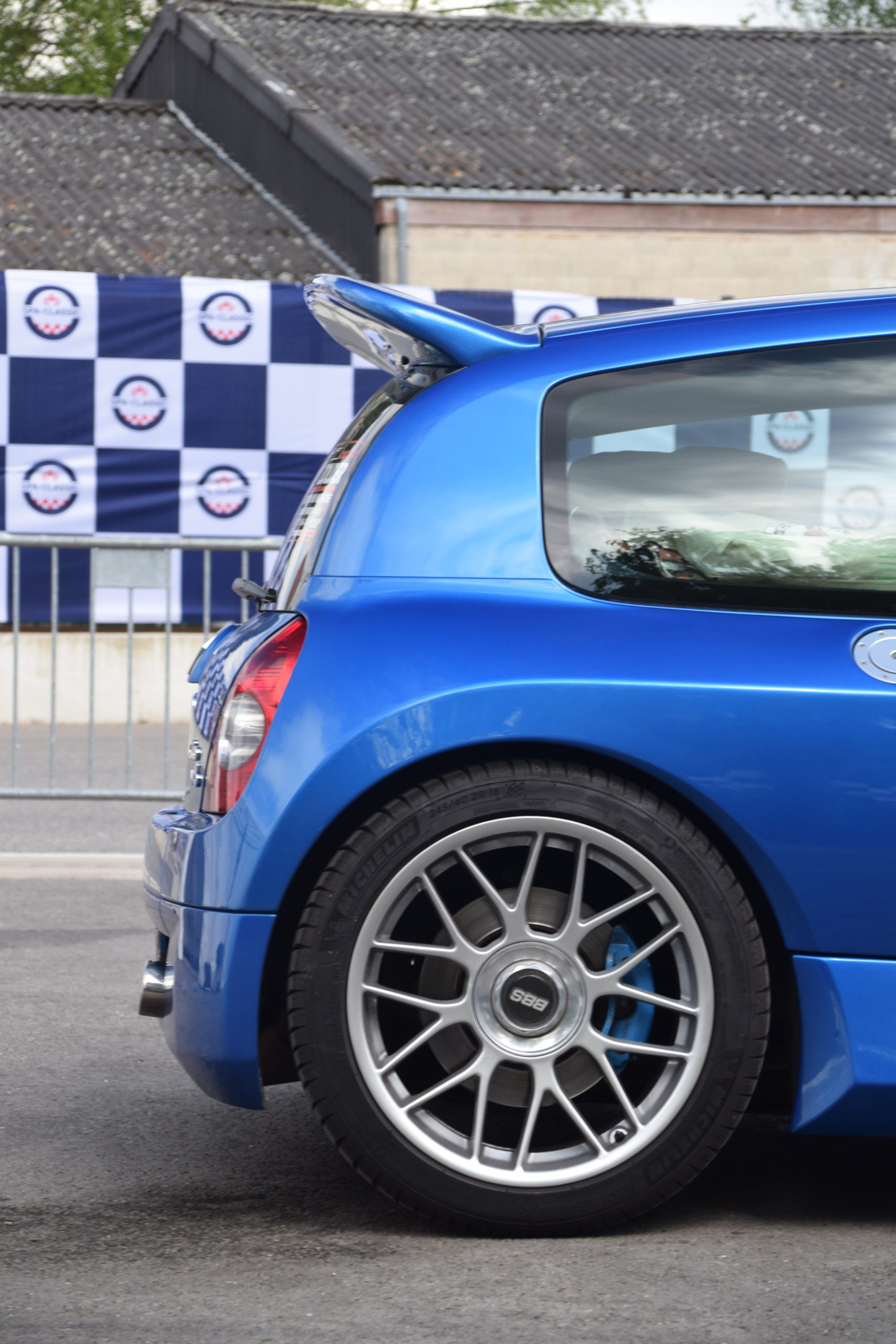 The people behind the project

The tuning done by TWR of the so called phase 1 was so popular they ended up selling 1631 units in just a two year period. It really proved to be a great project. This resulted in Renault buying the project with the purpose of bring the production to their own house. They made a new and more refined version going under the most creative nick name ever “Phase 2”. The performance went up in almost every fashionable way, with increasing power, new gearbox, stiffer suspension and so on. This model was launched in March 2003.

The Frenchmen surely brought back the gold to France, fetching their own touch on this car, in the strive for perfection. You can certainly say they succeeded. There are some nerdy differences between phase 1 and phase 2. Like the exhaust tips being more centred with only two tips instead of four. Also the air intakes on the side have been made more aggressive. The pictures of the one featured in this article is the Phase 1 model. 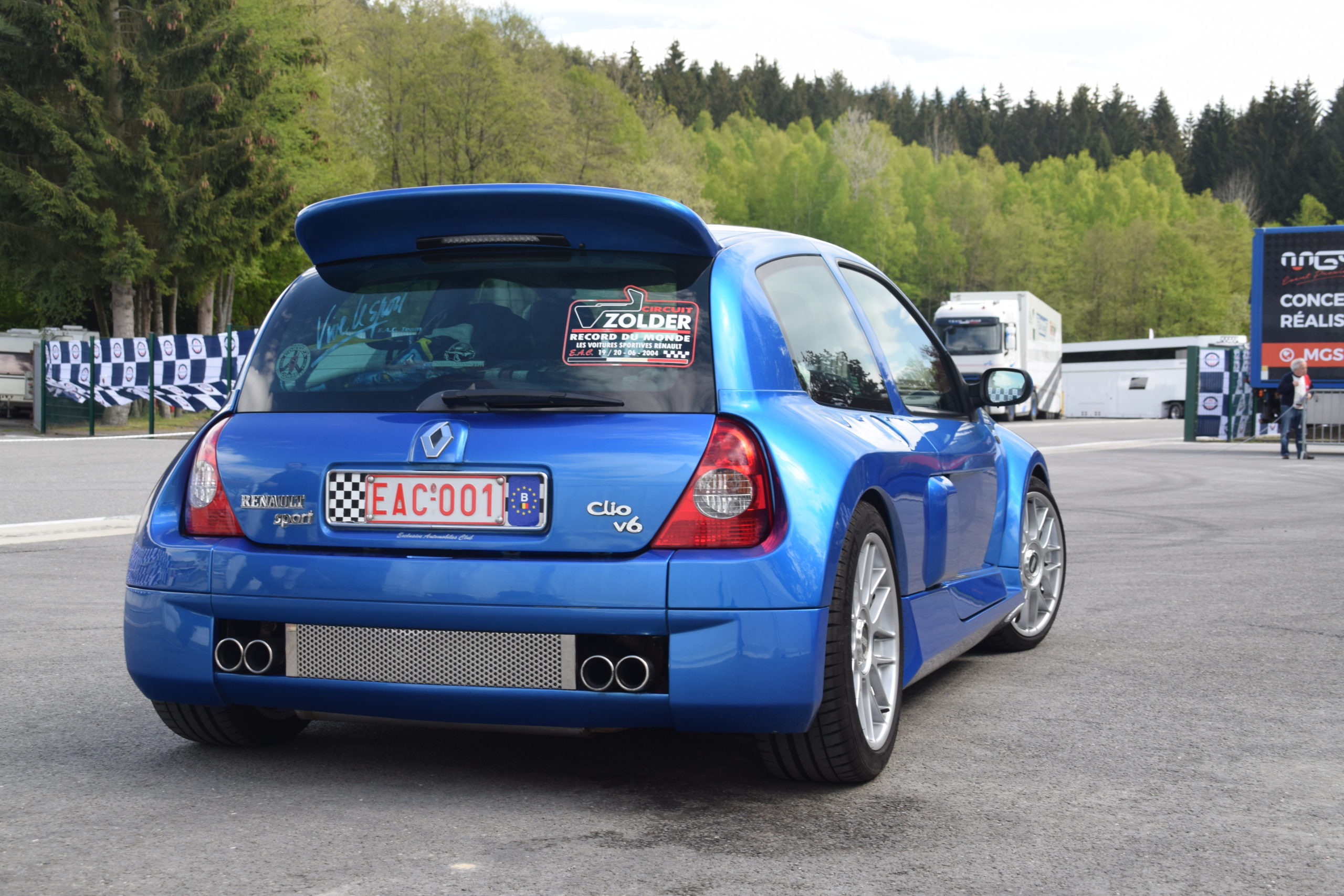 What is it like to drive? A handful is the short answer. Unfortunately I have never got an opportunity to drive it myself, but maybe you have? With the performance modifications it is focused on the driving experience and that contributes to low levels of comfort naturally. So if you feel heavy back pain after driving just a few hundred meters, it’s all normal. The car was built in a time when Renault was on its way to become very strong in Formula One.

What would be my rating on a scale from 1 to 5 stars in terms of driving experience?

Why did i go with this exact rating you might wonder. The answer comes from the fact that this still lacks a bit in some parameters, but also the fact that it is close to deadly on the very edge. This makes it a car not for everyone out there. Sadly. if it should have gotten 5 stars it would need just that. You would also have to drive around 20-30 times to be able to give everyone in the family a joy ride in it. That is quiet much. Other than that it still is great, pure fun and entertaining in almost every way. Therefore it get mighty 3 stars. Remember it can differ a lot from person to person how you feel about this great pocket rocket.

Some of you might remember the famous Fernando Alonso winning the world championship in both 2005 and 2006 to beat Michael Schumacher’s record of 5 consecutive championships in a row. The real key to this success comes from this car only. All the things used in the F1 car came from this project alone. Just kidding it was Alonso and the fantastic design of the F1 car that won them the titles. But imagine the golden era Renault was in, winning on the streets as well on the track. 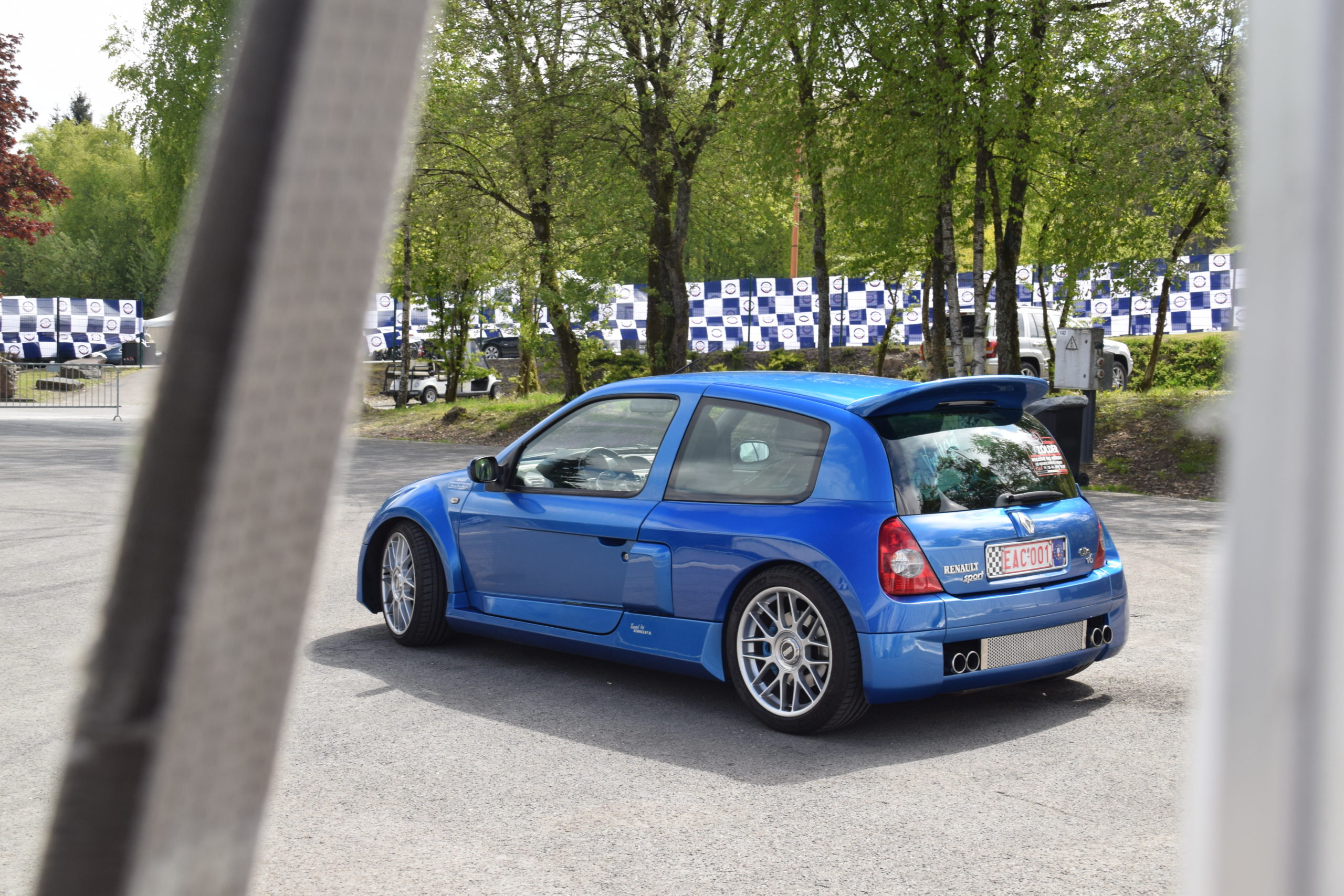 Did he forget about the investment part? Absolutely not! I saved the best for last for you. A French engineering masterpiece with a lot of soul. It really is astonishing in almost every mad way. It is radical to look at, like a normal Renault Clio on steroids and drives like one as well.

What would be my rating on a scale from 1 to 5 stars in terms of investment?

The reason for this choice is based on the sheer carziness of the project along with the fact that only 1631 units have been produced of the Phase 1 model to the entire world market. These numbers talk for themselves and that number might already have plumbed due to many aspects. We are really talking about a special car here with high potential to become very unique and a rare collectors object. The prices are already quiet high on the market and i will return to that.

The fact that it is also one of the best and most exaggerated projects to come out of the Renault factory makes this car even more special. This is partly why it have been given 4 stars. Then you might think, what should it have extra in order to obtain a 5 star rating. The answer to you is pretty simple. It should been even more limited. What?! it is already. No, we are talking a production of maximum 500 units for it to go to 5 stars.

Should you get one?

Yes! The answer Is very clear here. I personally think we might look at something just as special as the super classic and very rare Renault 5 turbo which have also risen in price like crazy the last couple of years. In a couple or maybe 10 years I think this Renault will draw an identical picture.

The fact that it is already quiet rare and only a small number is for sale, naturally pushes the price further up. I think we will only see an increasing in price and interest from now on with more sophisticated and homogenous cars entering the market making these small pearls very attractive. So get one while you can because it is rare and will be sought after in a couple of years.