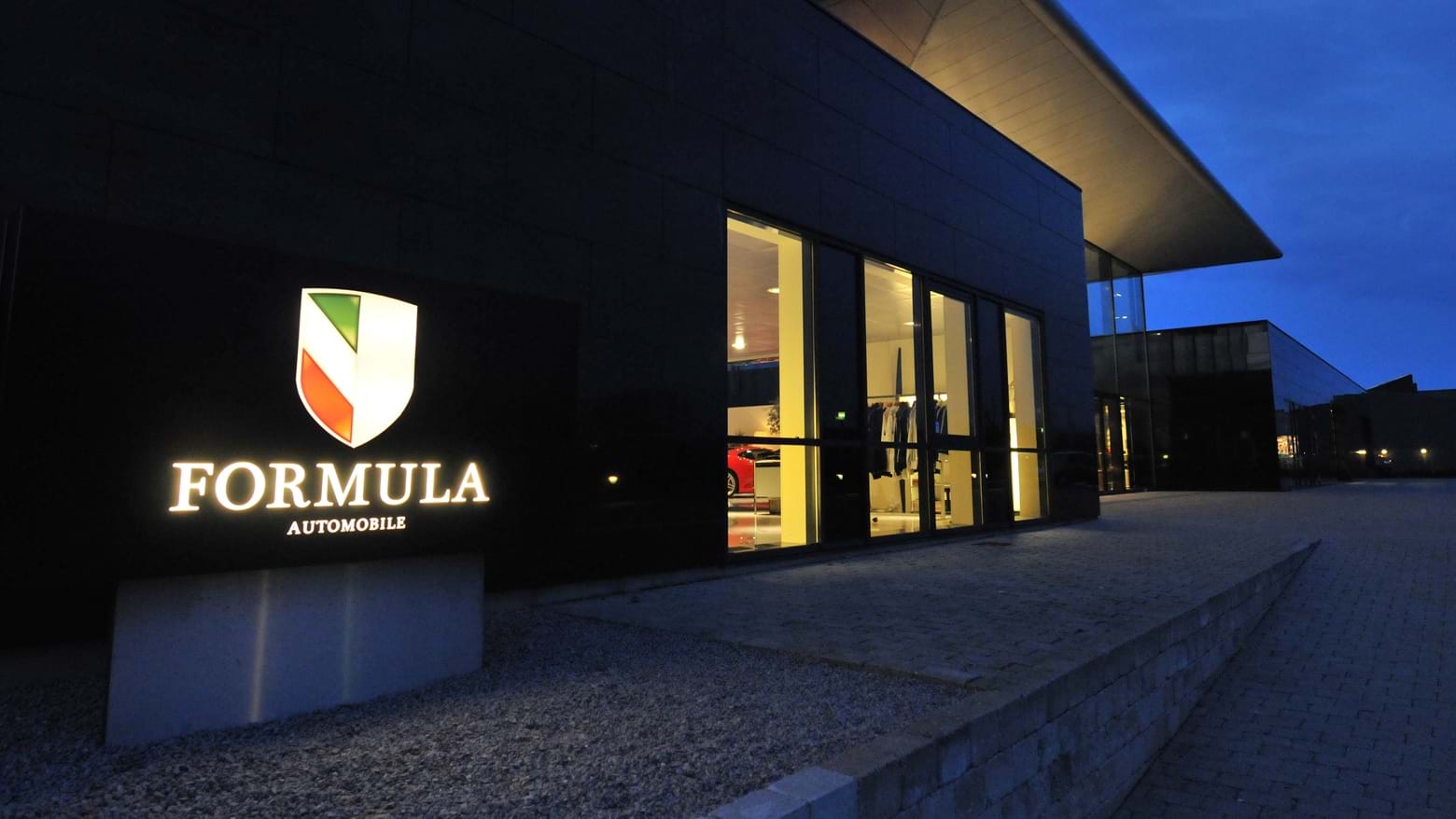 To work for Ferrari is extraordinary in almost every possible way. I once again want to talk about a more personal side of my life. A very great one actually. I want to talk about that time I used to work for Ferrari. Have you worked for Ferrari? Really? Certainly in some way. When I turned 18 I applied for a job at the local Ferrari dealership. Just the local dealership… We actually had one in the little town where I came from, and it was quite impressive. It was a lifelong dream for me!

Sadly I was rejected in the first place, but then some friends and I had to go skiing half a year later. I had no money for that, so I applied for a job once more and this time it was a success. I was 18 years old when I first sat in a Ferrari. I remembered it as was it yesterday.

The first Ferrari I drove

The Ferrari was a blacked out 2014 Ferrari FF with a 6.3 liter V12 producing 650 brake horsepower. For Illustration I have attached a picture of a similar car below, so you have a clue of what car I am talking about. To drive a Ferrari is an insane feeling, especially one of the top models. It doesn’t make It less crazy, the fact that I was just 18 years of age. I guess you can imagine that? 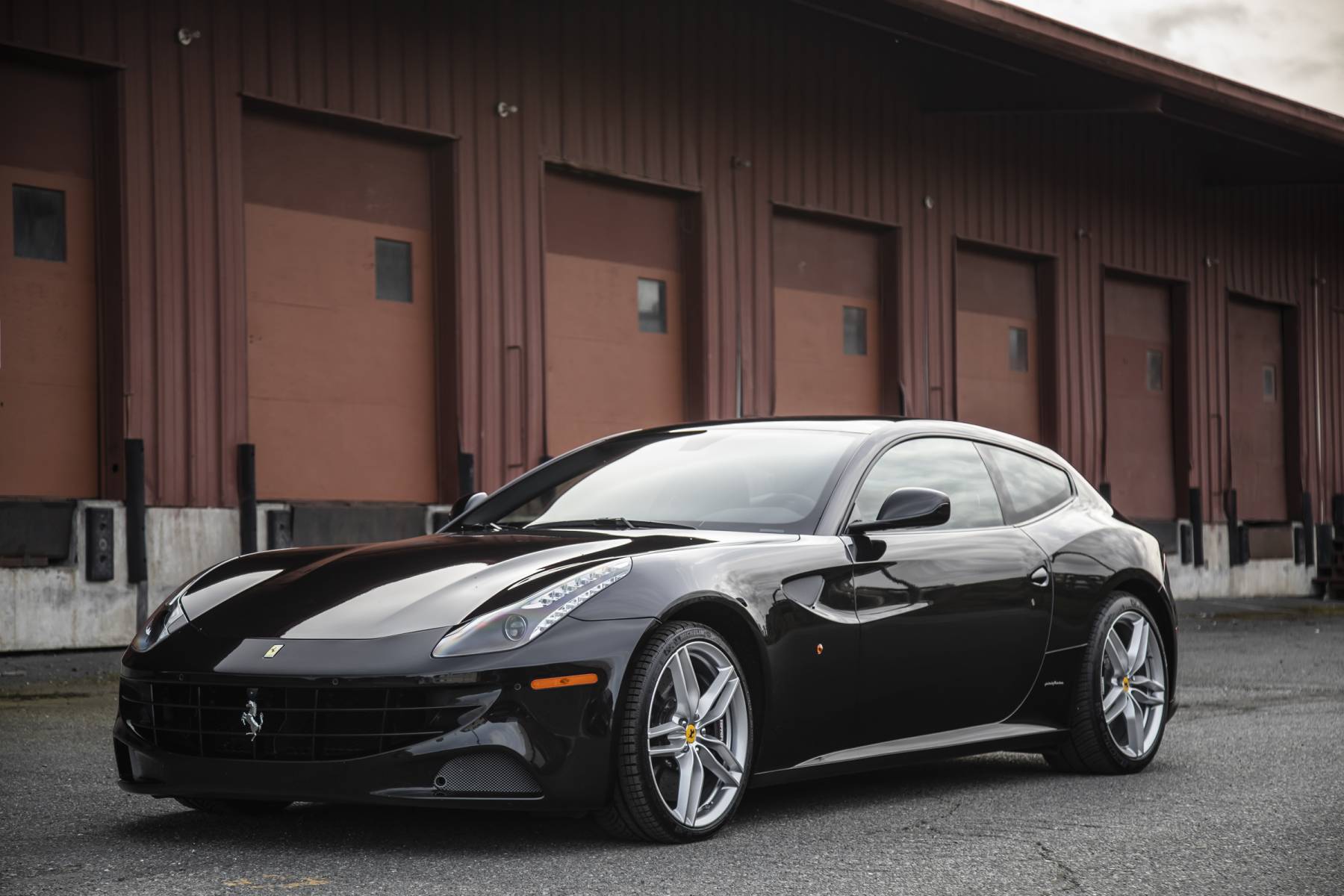 I undeniably had a rough start to my work at Ferrari. I worked at the dealership for approximately 2.5 years. In the first month or so I would find myself driving all sorts of Ferraris. Getting used to old as well as new models was a major challenge for me, even though it sounds simple. I had just received my driver’s license. Then shortly after finding myself in a Ferrari from the 70’s and 80’s with manual clutch as hard a rock and 12 cylindered engine that could explode any second was exceptionally difficult.

All these factors combined with a lot of responsibility of being the one in charge of closing the shop, making sure there was clean in the workshop was altogether, a big task for a young guy like me. I had no real experience with cars before this and it was my first real job. This proved to make the job even harder. I managed to overcome the pressure and eventually become pretty good at my job. And damn! was I a little proud? You bet I was.

Time flew as I became better and better at my work. The company evolved alongside, making expansions as more customers came to the shop. Is there really a clientele for these cars in little Denmark?  There is! It is a surprisingly and quickly growing segment. This of course meant more and more cars all the time, while we were still located in the same small building.

I have attached a little picture from the garage underneath the main building, where we stored some of the customers Ferraris and other special cars. It was a great and cool garage, but eventually it became too small and sort of chaotic. 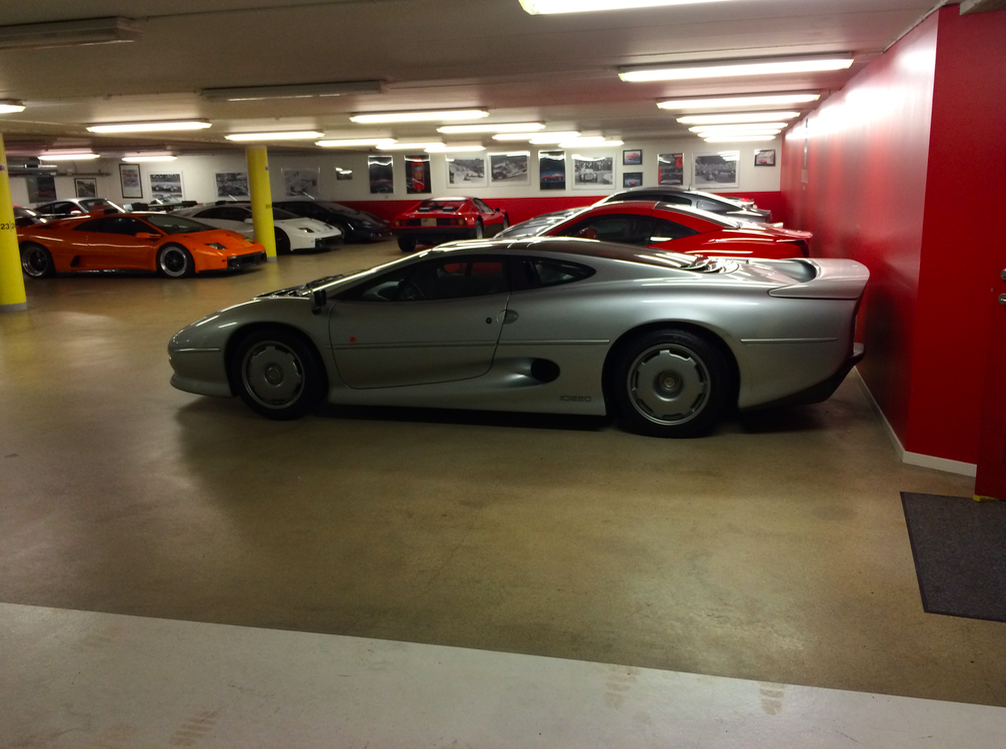 (The Ferrari Garage did not only contain Ferraris).

As I became better at the job, I would be involved in the more challenging tasks, so to speak. I remember one time we were out at a local event. It was the rector of a private school that told the parents of their kids, to bring their cool summer cars. This was of course the school, which the owner of the Ferrari dealerships son would attend. Now you might imagine he would casually bring a fine special Ferrari from his garage. It could for instance be a Ferrari 458 Speciale which was brand new back then. “No, no! Let’s bring the most insane cars we can dream of.” That was his idea, which didn’t take long for him to plan and execute. Suddenly “Bring a cool summer car to school” more or less turned into a racecar show with Michael Schumacher’s reserve F1 car from 2005 and a Ferrari 458 GT3 – Le Mans car. 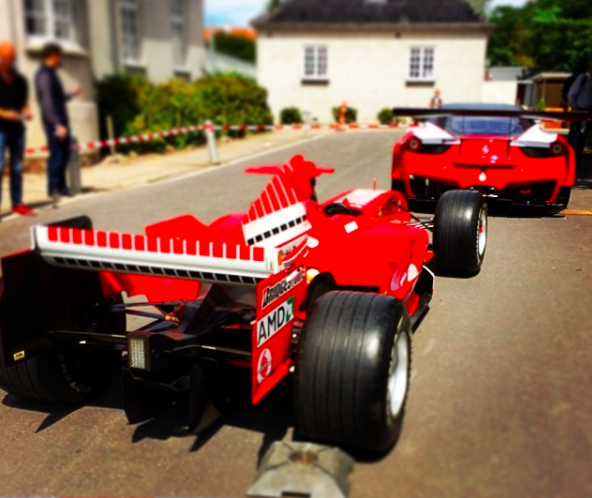 None of them could or was allowed to drive on the public roads, so of course they should be transported by a large truck. It was truly crazy and something straight out of a movie. Half of the company which consisted of 40 people, was out giving a helping hand. It turned out to be more like a racing event rather than a relaxing Friday car meet. But I guess that was a part of the fun. There were a couple of those insane but cool days of work in my time at Ferrari. It was making the job extremely exciting and special and also very memorable.

How my work routine changed over time

When working at the local dealership a couple of days a week, normally meant one thing. Getting the keys to an expensive Ferrari and drive it. It really is something everyone should have a chance of trying in their life. I was lucky enough the chance came to me, and I can only look back at that time with joy and excitement. Still remembering some of the many cool cars I had the chance to drive. Just before I stopped at Ferrari for going to study at University, the brand new Ferrari 488 GTB was released. We quickly received one at our dealership and suddenly I would also find myself with the keys in the hand to it. You can see what it looks like from a young person’s perspective. 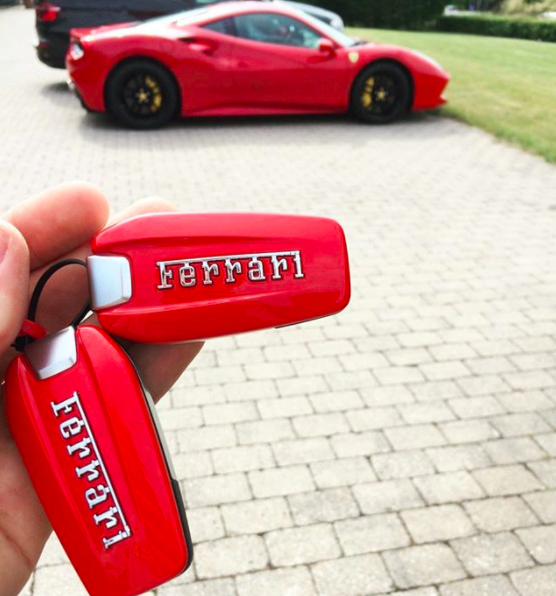 After a couple of years of work, most of it became routine and the cars was getting more and more outrageous. The numbers of customers increased more and more, limiting the work quality of my job as well, as giving me a lot more workload. The Ferrari dealership went from not only having Ferrari and Maserati in the store, but to now purchasing supercars from many other brands. This was a result of leasing becoming more and more popular. Suddenly not only super exclusive Ferraris was the cars I would find myself driving, but now also cars like the Porsche Carrera GT and Lamborghini diablo along with many other both new and old special cars. It was like a gift that would never stop giving.

The Icing on the cake

The most exclusive car we had in shop In my time, was without doubt the fantastic Ferrari La Ferrari. Possibly owned by the LEGO family, but I’m not exactly sure. It was the craziest car I have ever seen in real life and still my all-time favorite Ferrari. The Look, the sound and everything it stands for is why I love it so much. I managed to get a little picture of the car back when it came into the workshop. It was delivered almost 2 years after it was first presented to the public. This indicates why it is so special. 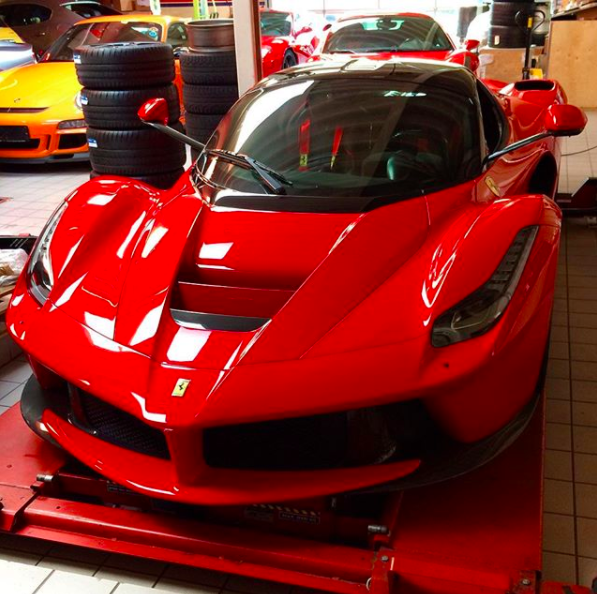 The shop was always packed, and by the time my career at the little local shop was done it was so chaotic. They turned their minds towards extending the shop but instead they planned to build a new super shop in a larger town, closer to Copenhagen. It was an era I’m so blessed to be a part of and I will always look back at it as one of the best times of my life even though I’m still young.

The future of Ferrari in Denmark

The previous building is now rented out to another car company and Ferrari has moved their beloved and cool dealership to a much larger and slightly more exclusive building near Copenhagen. I guess they wanted to be closer to their international customers as well. It was also necessary due to the lack of space and infrastructure at the old shop. It turned out to be a pretty great and looks very professional indeed. 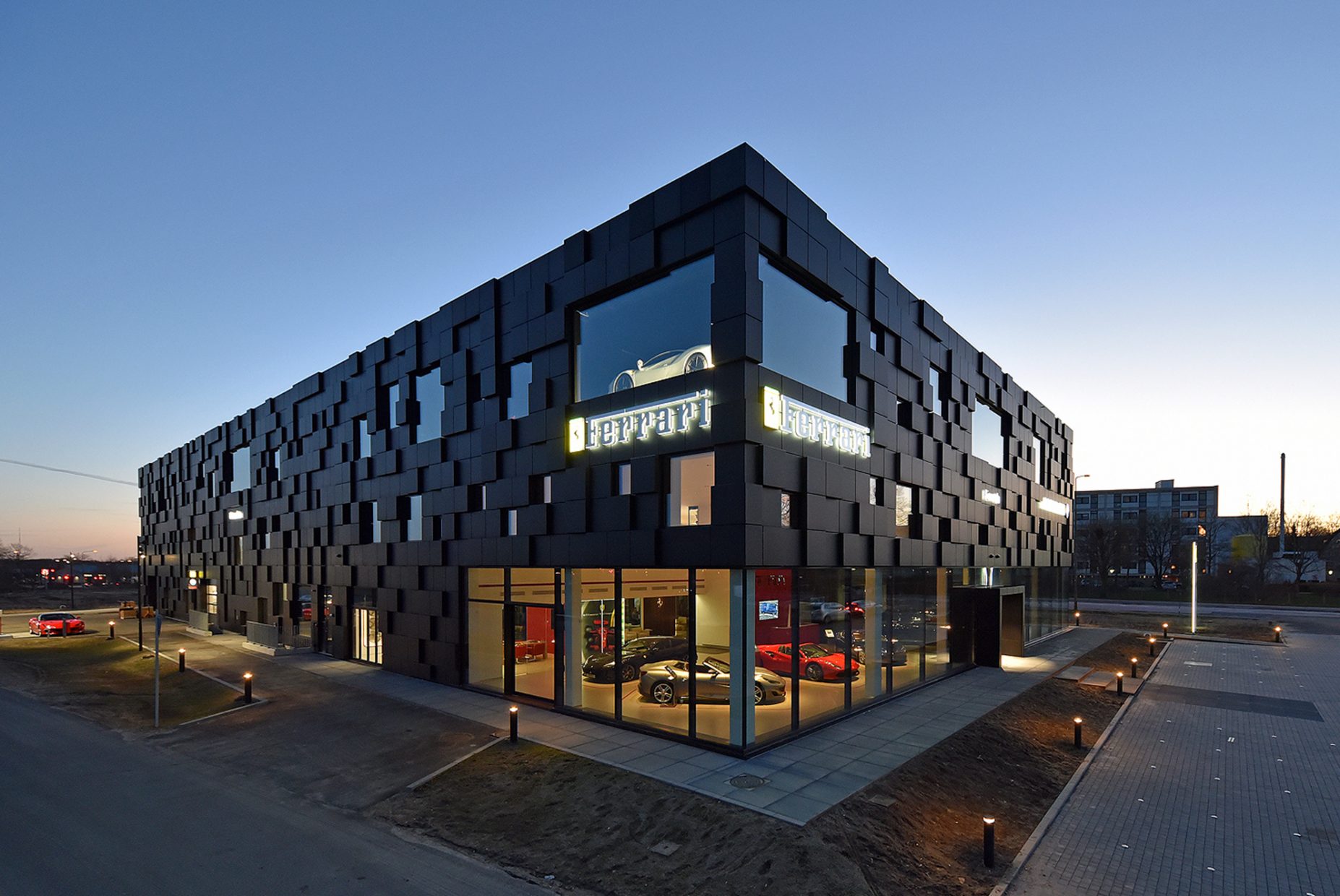 Gesture to my old work

A little acknowledgement should also go out to my old colleagues and workplace. Thank you Ferrari and the respective people for giving me this opportunity to work for you! you helped a young car enthusiast achieving one of his most desired car dreams. The dream of driving a Ferrari. You should know that! It is still hard to believe for me and it definitely does something positive to you as person. I think I want to work with cars at least one more time in my life because of this  fantastic experience.

This article Is also featured on the Classic Cars Journal.com https://journal.classiccars.com/