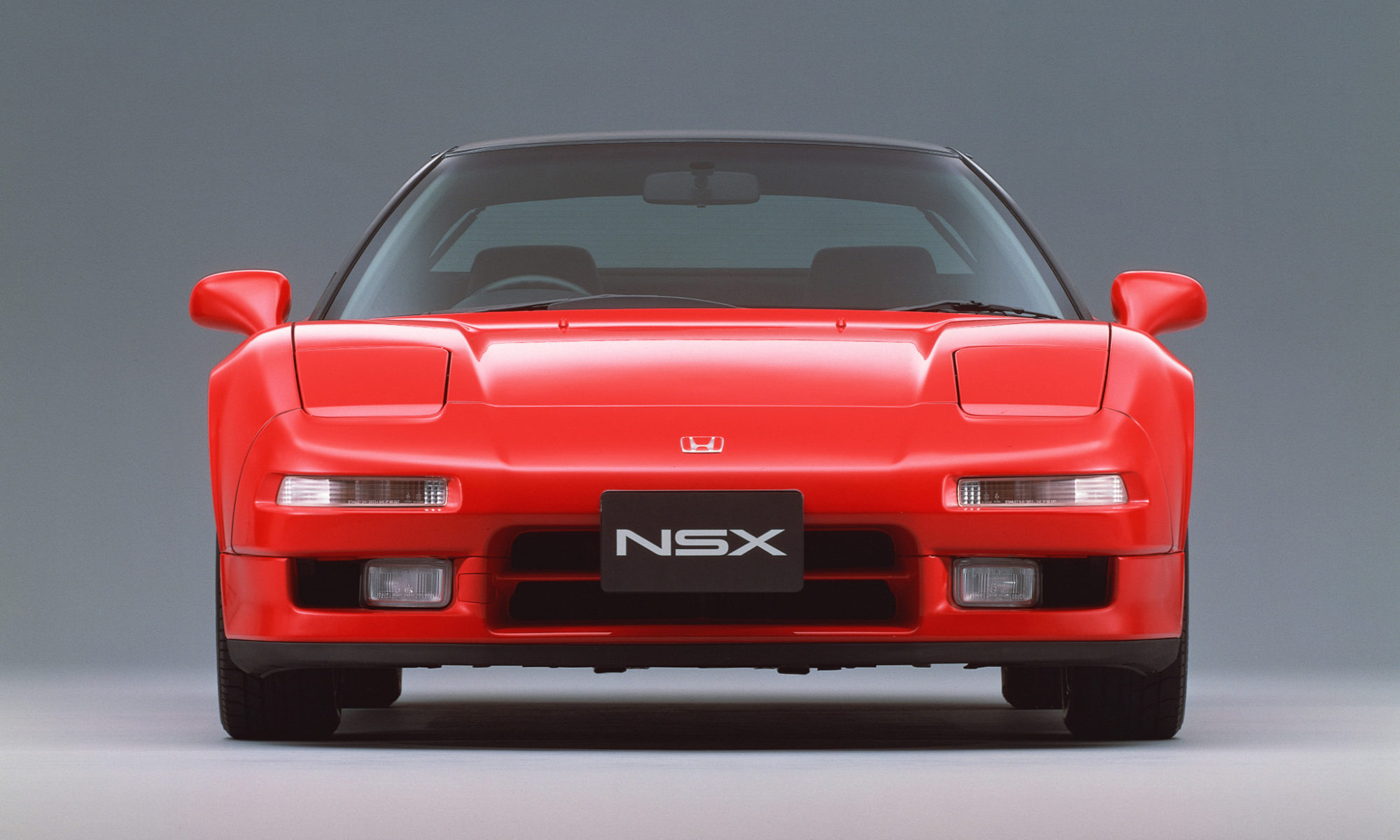 Honda NSX. One of the most surprising supercars ever to be produced. It was a true masterpiece of engineering when it came out back in the early 1990. Already now the questions might arise seriously. One of them might be why the Honda is called the NSX? The answer Is actually not that complicated. NSX stands for New Sportscar eXperimental. The car is somewhat of a funny project made by the Japanese car company.

The Honda NSX was originally built to beat the Maranello produced Ferrari 328 and later on the Ferrari 348. The Ferraris where at that time one of the most sporty and fastest cars you could buy. The fact that the Ferrari 348 was very poorly build and lacked charisma was really a mirror image of what Ferrari had experienced, in their counterpart production and development area of Formula 1 championship at that time.

With Hondas launch of the mighty and very well build Honda NSX, Honda brought inspiration and development to the world of supercars! They didn’t go by themselves. They got crucial advice from the even mightier Formula 1 driver. Ayrton Senna. It was a project that looked very promising indeed and also ended just that way.

On paper the later Ferrari 348 would seem much more exclusive. But! when it came to driving the two cars, the difference was huge and very easy to spot. Especially for a race driver like Ayrton Senna. It was like two different cars that was producing roughly the same power and weighing almost the same.

How is it to drive?

You could immediately tell that a racing driver had been involved in the development of the NSX, but not just any race driver. It was the fastest, most intellectual and by far the most focused racing driver the world have ever seen. The simplicity of the interior combined with the functionality of the design, clearly indicates that racing was the main focus of the whole experimental development. Ayrton Senna apparently knew how to make a great and functional design that worked in perfect harmony with the mind and spirit of racing. 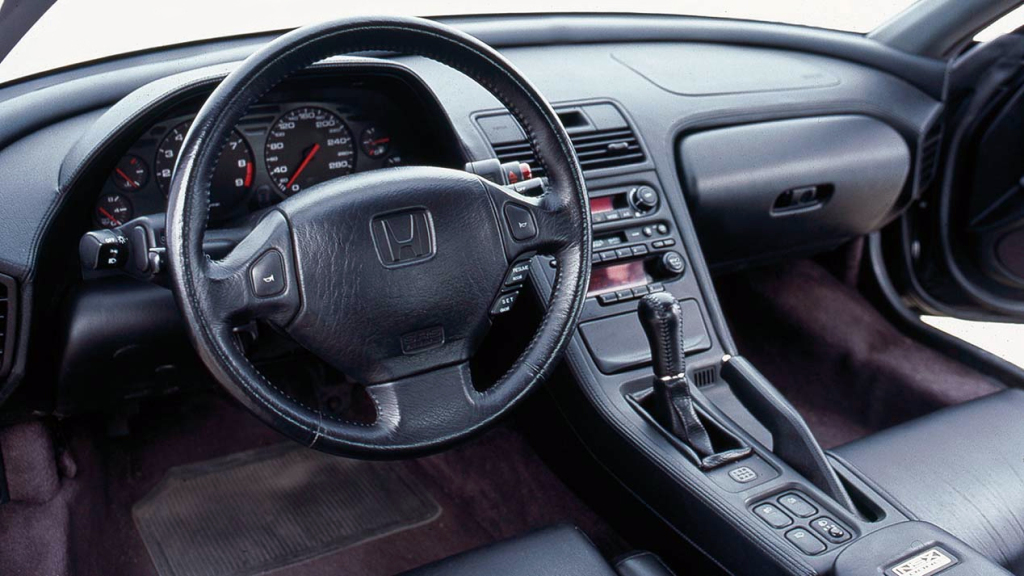 (The interior of the Honda NSX first generation: 1990).

Ayrton Senna onboard the development.

The importance of having Ayrton Senna working on the Honda NSX project until the launch in 1990, was just as crucial as inventing electricity. Might be even more? Maybe it was just a great partnership that provided one of the best supercars at that time for both the road and the racetrack. If you have driven the car you are never in doubt about It’s incredibly abilities to go fast around corners, the stability and it’s agility. It tackles all the environments extremely well and delivers positive surprises every time you drive it. It is simply stunning. If you haven’t tried it. Go do it today! 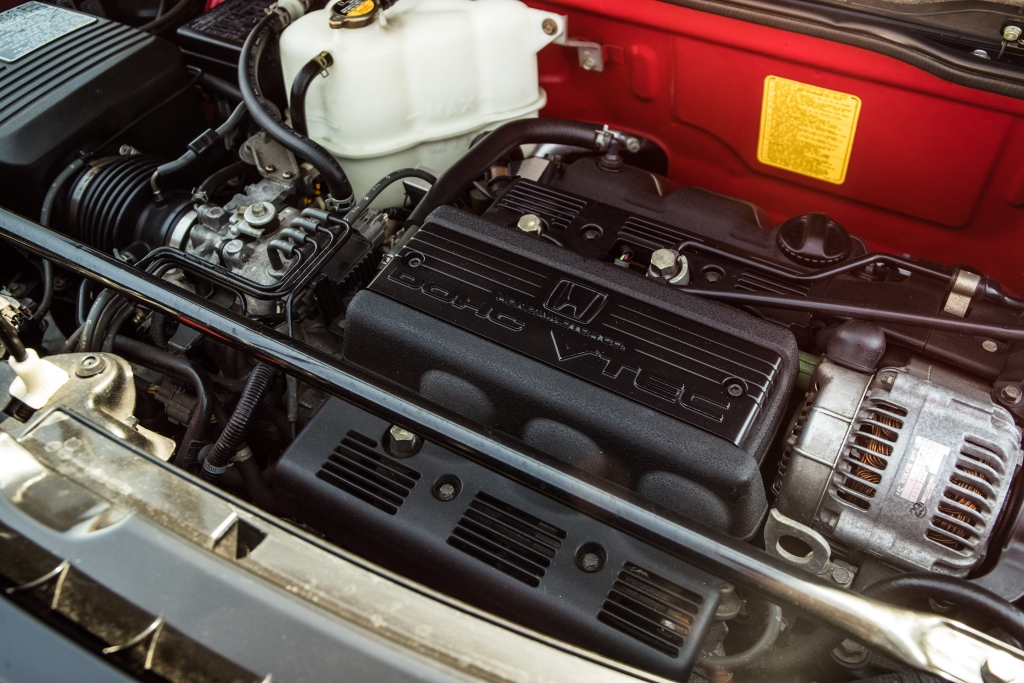 (The engine bay of the Honda NSX).

The fierce battle between Ferrari and Honda on the race track in Formula 1 didn’t even end there and quickly found It’s way to the road cars. This was truly the wake-up call Ferrari had needed for quite some time, for them to start producing proper sportscars again. This was on both on the road as well as on the race track. They really came after it, but we’ll leave that for another time. But I guess most of you know that story very well. Especially if you a fan of the great F1 driver, Michael Schumacher.

The world reveal of the Honda NSX

The first generation of Honda NSX was revealed to the public in 1989 at the “Chicago Auto Show” in the start of the year. Later same year it was revealed in Tokyo as well. Following production started in August 1990 and the final one was produced a whole 15 years later in November 2005. That is very impressive taking into consideration that it is a pure sportscar made for the track. 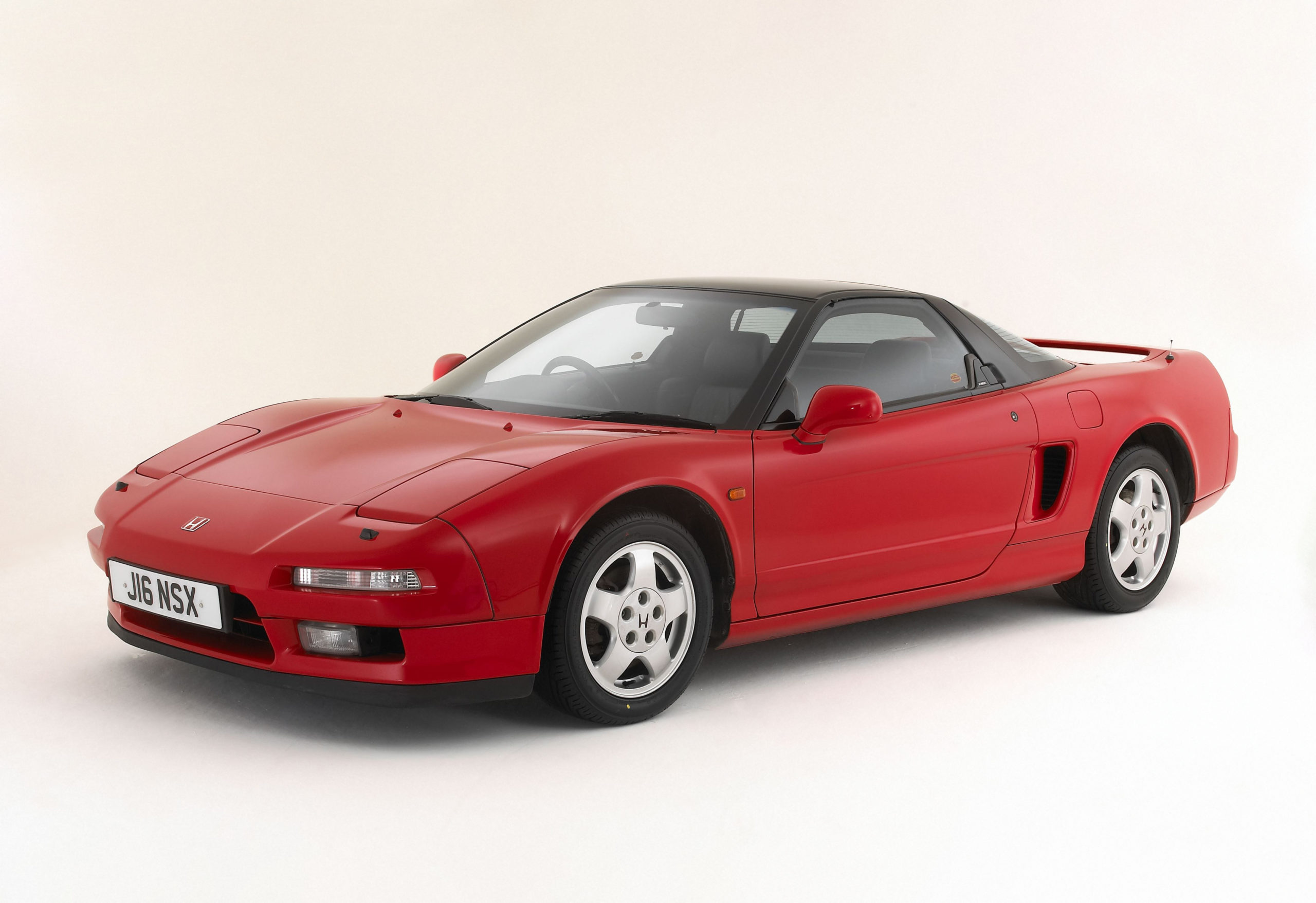 (The Honda NSX in a classic but magic red colour).

The facelift – was it enough?

Throughout the years of producing the car, it more and more needed a fresh update to the looks and technical abilities. It took the engineers at Honda a surprisingly 11 years to make the first and only facelift of the car. It was not major updates to the whole body of the car, but smaller and more subtle changes. These changes looked shockingly identical to the original car, except the clap headlights have been changed to integrated more modern headlights.

They might have relied a little too much on the original design or either been stuck too long at the old part of the factory watching Ayrton Senna doing hot laps in the early production model. Then realizing very late they needed to make a facelift of the first generation NSX in order to stay in competition.

One of the things that really stands out with the Honda NSX compared to the closest competitor, the Ferrari 348 is unquestionably the engine. The Ferrari is powered by a regular 3,4 Liter 8 cylinder engine producing 300 brake horsepower. Whereas the Honda NSX Is powered by a smaller transversely 3,0 Liter 6 cylinder engine delivering 270 brake horsepower and 290 in the facelifted version. There is no turbo in either of the two cars.

Instead the NSX has the spectacular VTEC system resulting in higher performance at higher RPM. It feels like pushing a boost button while you are already accelerating hard. It’s madness to say the least! You really have to try it if you get the chance. It’s very addicting.  It really is a great and fun experimental concept they worked on at Honda, back then. You don’t get these types of engines anymore due to the fact of emission regulations and the fact the turbo has completely taken over, as the most effective power generator for the combustion engine.

What is the future investment perspective?

This brings us on to the investment perspective of Honda NSX. We are certainly looking at a very fine piece of automotive history, combined with the legacy of Ayrton Senna. Also the fact that this very special car that is very fun to drive and possible for almost everyone to take around a track is just some of the reasons why it has kept its price very good throughout the many years of production.

Have it kept It’s price high in the years after production as well. You bet it has! Actually the prices have gone through the roof in the last couple of years. It is very impressive. There is no indication this will change since the future will only make this model even more rare. If you are looking for the best one of the model to invest in, you have to go for the NSX-R version. It is a fine tuned version of the NSX with more power, better suspension and a slightly more aggressive look. This NSX-R model is especially rare and is also the reason why it cost a lot more than the regular ones. 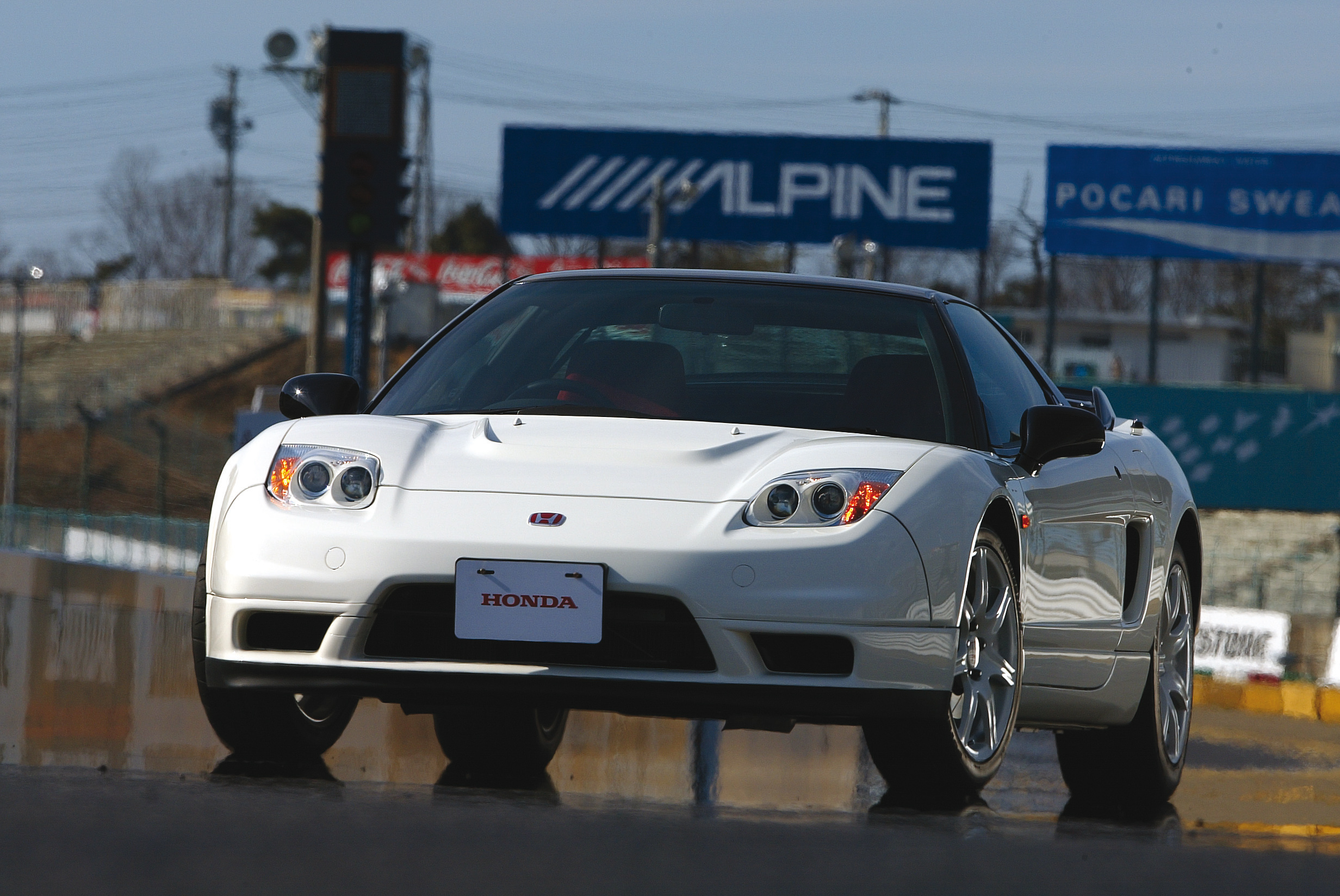 (The Honda NSX- R concept revealed in 2001 and was only build in a few copies).

I found a couple of models for sale. With only a few numbers for sale on some of the most coveted car dealer sites in all of Europe clearly indicates that the market is really sacred of cars. Especially the newer and apparently much more rare facelifted model. The lowest priced NSX starts from around 47.000 € and it goes all the way up to 180.000 € for the most expensive one on Mobile.de. There is also 5 for sale on Pistonheads.com where the cheapest one starts from around 48.000 £ (pounds) and goes all the way up to 140.000 £.

What are the expectations?

We can easily conclude from this, that this car is truly a rare collector car with a big audience that have exceed the highest expectations from those who were kids when it came out. It never really won towards the Ferrari models back in the day, but it seems to take the trophy now. If you want a great car with a touch of Ayrton Senna racing legacy, then go get one today before it’s too late. I believe the price will only go one way from now one. So strike today!

One Reply to “Honda NSX – The car to beat Ferrari?”